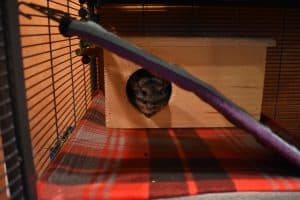 If you have recently adopted a chinchilla or plan to soon, it’s completely normal to wonder if chinchillas get scared easily.

After all, it wouldn’t be much fun to adopt a pet that’s constantly trying to run from you.

I was the same way and here is what I can tell you on the topic.

I know that the answer started with some bad news and then shed some light towards positivity.

It takes some warming up before a chinchilla won’t fear you.

After this time passes, you can look forward to fun interaction, holding your chinchilla and much more.

Chinchillas being scared in the first few weeks of being home is just natural chinchilla behavior.

One of the most important posts I have on this topic discusses how quickly chinchillas adapt.

It’s entirely about how chinchillas adapt to their environment that you can see here.

As far as the rest of the details, let’s dive in.

Like I stated previously, chinchillas do get scared easily.

It’s not necessarily your fault either.

You must understand that chinchillas are used to be the victim in the wild.

They are the hunted.

When you first arrive home with your chinchilla is when fear will be at its maximum.

They are attempting to adapt to new smells, visuals and even the lighting.

Not to mention your voice and how you choose to handle your chinchilla.

The best thing you can do is embrace this period when you are a new chinchilla owner.

If you respect your chinchillas’ space, the breaking in period doesn’t take long to overcome.

For my chinchilla, this warming, up period took about 10 days.

After this time had passed my chinchilla started showing signs that she was ready to bond.

You can read my post about if chinchillas are affectionate here.

It will provide more of the details about how loving chinchillas can be when they trust you.

It’s after this warming up period that you can also expect your chinchilla more cuddle friendly.

This is another topic that deserved its own post to discuss.

You can read about if chinchillas are cuddly here.

10-14 days into owning my chinchilla she was climbing all over me and sitting in my lap.

This did, however, take patience and some additional work on my end to reach this point.

The next section of this post will help details those specific tips and tricks next.

Stick around for a minute.

Interact as Often as Possible to Build Trust and Reduce Fear

Well, shockingly enough, many chinchilla owners fail to interact often with their chinchillas.

This is ultimately what builds the bond with your chinchilla.

If you want a chinchilla that’s friendly and that wants you around, you don’t have a choice.

Speaking of that, feel free to read my post about if chinchillas are friendly here.

It gives good details about a chinchilla’s behavior and temperament after adoption.

Let’s get back on topic.

The more you interact with your chinchilla, the faster they will warm up to you.

Clearly, if your chinchilla is warmed up to you, they won’t scare so easily in the future.

Spend some time talking to your chinchilla.

Find the spots they loved to be scratched such as under their chin or behind their ears.

If they don’t like what you’re doing, then stop doing it.

It’s not necessarily rocket science, but its trials and error to learn your chinchilla and what they prefer.

Your Chinchilla Will Be Less Scared Of Your Respect Their Space

This is one of the best tips I can give you in this post.

It’s the same advice the breeder I adopted my chinchilla from gave me.

If your chinchilla is clearly scared, allow them the space to calm down.

This can include not doing things such as reaching into their hiding box inside their cage.

This is their safe haven and where your chinchilla will feel the most secured.

Also, if you aren’t an expert on how to pick up a chinchilla, don’t corner your chin trying to do so.

I’ve seen other chinchilla owners using tactics like trying to get their chinchilla into a small travel cage.

Letting your chinchilla come to you is a much better approach and builds much more trust.

Therefore, you’re clearly eliminating your chinchilla from being scared easily in these situations.

Use treats or a dust bath if necessary, to get your chinchilla to come out of a frightened state.

And of course, always remain patient.

It’s the most important advice you can be given when adopting a chinchilla.

This tip can also go a long way towards building the bond with your chinchilla.

It’s also going to make your chinchilla much less scared and timid.

In the first weeks, if you want your chinchilla to be less scared, keep things basic.

Your dog and chinchilla do not to be interacting together.

Your dog doesn’t even need to be in the same room as the chinchilla cage during this phase.

Young kids can also avoid being around the chinchilla while they are adapting.

Young kids tend to make loud quick noises that may scare your chinchilla.

After the ten-day break-in period, this is a completely different story.

After that period, interact with your chinchilla as you please.

Just always remember, the first ten days are the hardest for your chinchilla.

Relax and take things slow with your chin and everything will be much easier soon.

A Few Other Tips of Advice to Build A Stronger Bond

Outside of the tips already discussed, I have a few other key points to touch on briefly.

First and foremost, time out of the cage is essential to eliminating any fears your chinchilla has.

The more you have your chinchilla out and about and interacting with you the better.

If your chinchilla gets scared easily in the beginning, this will fix the problem quickly.

You can take my word on this.

I promise it will work and it worked like a charm for me.

However, like this entire post stated, a chinchilla being scared only typically happens in the first weeks.

Additionally, avoiding common issues such as cornering your chinchilla or invading their space helps a ton.

Simply respect your chinchillas’ space and their preferences and they will respect you in return.

Additionally, always make time to get your chinchilla out of the cage and interact with them.

The more interaction you have with your chinchilla, the faster they will recognize you.

This can go a long way to ensuring that your chinchilla is no longer fearful or timid.

I’d love to hear your thoughts on this topic as well.

Was your chinchilla timid in the beginning?

What did you do to help your chinchilla become less scared after arriving home?

As always, I appreciate you stopping by.

Catch you next time.