You give your chinchilla a command and it jumps up and executes a perfect flip.

Or it runs up to you, gets on its hind legs and extends as tiny little paw for you to shake.

Well, I hate to burst your bubble, but never going to happen.

I mean, I suppose it’s possible, but I’ve never seen it.

That’s not what we’re talking about when we ask if you can train a chinchilla.

So what do we mean? And what’s the answer? Can you train a chinchilla?

Keep reading to learn what you can train a chinchilla to do, how to train your chinchilla, and how hard it is to train them.

Can You Train A Chinchilla And Is It Easy?

Chinchillas are easy to train, but only for limited things. You can train them to recognize you and their own names. You can also train them to urinate in a litter pan and to respond to stimuli, like returning to their cage when you offer a treat.

Apart from these basic commands, chinchillas are not necessarily an easy pet to train.

But let’s be 100% clear. They don’t need to learn much more than this to be an amazing, loving, and affectionate pet.

Chinchillas are extremely intelligent animals and a joy to own in general.

Don’t fret about them not learning other commands. They are unlikely to learn tricks in the way a dog can. Your chinchilla will probably never do things like:

I’m not necessarily saying it is impossible to teach a chinchilla some of these tricks.

I’m a firm believer that any animal as smart as chinchillas could potentially learn some neat tricks with enough dedication.

It’s just that I have yet to see it happen. If you have taught your chin tricks like this, or have seen someone else do it, make sure to comment below. I think that would be pretty darn cool.

But as mentioned, chinchillas can learn a few other behaviors and commands relatively quickly.

For example, it’s entirely possible, that once your chinchilla trusts you and recognizes you, that you can get it to do tricks or learn commands like:

These are the three basic commands to which you can easily get you chin to respond.

The hardest of those three would undoubtedly be litter training. It took me about 4 to 5 months to achieve a high success rate with this.

You can read more about this by visiting my post about how to potty train a chinchilla here.

You also check out the best chinchilla litter to use.

Typically, when it comes to teaching your chinchilla to respond to its name or to return to you after playtime is complete, it takes nothing more than patience and diligence.

If you peak to your pet enough times and find smart ways to get it to come back to you, so you can return it to the cage, it will catch on relatively quickly.

I still sometimes need a small incentive to get my chinchilla to return to its cage, like tapping on its dust bath or even offering up a little treat from time to time.

But be careful of offering too many treats too often. Not only can this cause stomach issues, but you also don’t want to end up in a situation where your per won’t do anything without a bribe.

No, chinchillas can’t learn real tricks. Most chinchillas are quite limited in the tricks they can perform and the commands to which they will respond.

Teaching a chinchilla tricks like we do with certain other pets simply is not a realistic expectation.

Again, I’m not saying it’s impossible. But it is highly unlikely. Most chinchillas will never do tricks on command for their owners, so make sure you adjust your expectations accordingly.

How To Train A Chinchilla To Do Tricks

Again, I wouldn’t use the word tricks freely when it comes to training a chinchilla.

A better way to phrase this would be “how to train a chinchilla to respond to commands and respond to its owner.”

Doing this and getting your chinchilla on the path to learning some of the commands we mentioned previously is relatively easy, but it does take some patience, while your bond slowly but steadily grows with your chin.

Treats are the most common way to get this process kickstarted. Again, limit treats and don’t offer to many, or any dangerous fruits that chinchillas should not eat.

Begin by having close interactions with your chinchilla. This means interacting with it in an enclosed space.

If you’ve read other posts on this site, you probably know that I’m a massive advocate of using a pop-up animal play tent in which to interact with your chinchilla.

This helped me dramatically by reducing the space in which I interact with my chinchilla. It allows you to really focus on handling, petting, and saying your chinchilla’s name.

As it begins responding, offer a small treat so that it starts associating coming to you and allowing you to handle it with something positive and desirable.

You can see the exact pop-up tent I use in this article. It is the first tent mentioned.

It’s seriously one of the most significant purchases you can make to get the training process off on the right track, by speeding up the bonding and handling process dramatically.

Training A Chinchilla To Be Responsive To Handling And Holding

While staying on the same topic, I wanted to continue a bit further and discuss how to get your chinchilla acclimated to being handled and held.

A lot of chinchilla owners struggle with this in the beginning.Once again, that pop-up animal tent discussed above is going to save your life and make this process much easier and quicker.

Instead of going into much more depth here, I highly recommend you check out my post about how to get your chinchilla to enjoy being held. You can also read up on how to pick up a chinchilla here.

Now let’s cover a few commonly asked questions when it comes to training your chinchilla.

Can Chinchillas Learn Their Name?

Yes, chinchillas can learn their names. In fact, they learn and respond to their chinchilla pet names before learning any other commands.

To teach your chinchilla to respond to its name, interact with it closely, speak to it often, and use its name often.

When it respond to its name being spoken, reward it with a small treat or some love.

This is probably the first trick/command your chinchilla will ever learn and it doesn’t take long at all.

It also seems to stick with them quite well.

I’d say that my chinchilla recognized her name being spoken within a few weeks. And to this day, she will come out of her nest box or wake up from a night of sleep on her hammock whenever I enter the room and say her name.

In case you weren’t aware, chinchillas absolutely need a nest box to feel safe. You can read my post about the best nest box for chinchillas here. You can also learn more about chinchilla hammocks and the best options here.

Can You Train A Chinchilla To Use A Toilet? 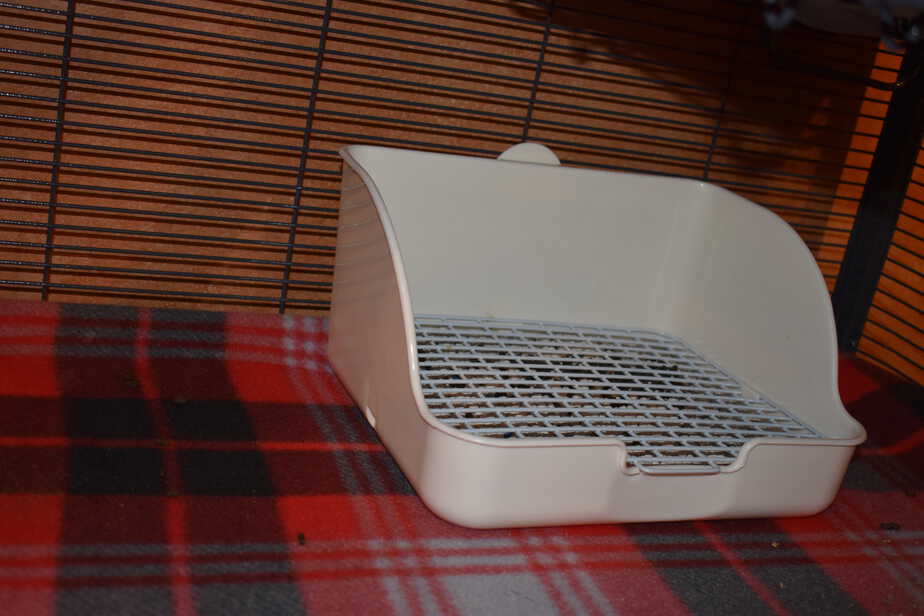 Yes, you can. Instead of elaborating too much on this topic, it’s much easier for you to simply check out my full blog post on the potty training process with your chinchilla.

In general, chinchillas are not known to be biters. However, in some situations, they may bite. But, in some circumstances, you have a few things you can do to curb the behavior.

One tip my breeder gave me on adoption day is to never pull back quickly from a chinchilla bite.

Don’t let your chinchilla know that biting you achieved a desirable behavior from you, such as not petting or handling it.

I’ve only had my chinchilla slightly nibble in more of a playful way or in a fashion that indicated that she simply wanted to get my attention. She’s never bitten me, so I have no firsthand experience here.

But let’s go ahead and assume that  when trying to hold your chinchilla, it did not really like the way you were picking it up and decided to bite.

This is when you should implement that tip I just provided. And yes, I know it’s not easy. A chinchilla bite can hurt. But don’t let your chin know this.

You absolutely don’t want it thinking that anytime you do anything with which it slightly disagrees, it can just bite down on you to get you to stop that behavior.

Remember, you are in control.

Also, please do not freak out over this section of this article. Chinchillas rarely bit, and if they do, it’s something you can usually change easily. Generally, you just need to modify how you pick up and handle your chin.

If you are struggling with this and you pet is biting you often, be sure to spend more time with it and work on building a stronger bond and trust with your chinchilla, before you handle it further.

It could be that you’re simply forcing the issue a bit too quickly in the beginning.

Remember, it takes a few weeks for your chinchilla to sufficiently warm up to you and its environment. Sometimes even longer. Only after that has happened, should you begin to handle it.

Lost chinchillas are perhaps the most common issue, especially with new owners, out of anything discussed in this article.

Trust me, if you allow your chinchilla a large enough play area, eventually, it will find a way to hide from you. And probably more than once.

The best way to make sure you can always get your chinchilla to return to you is to use a dust bath to your advantage.

I use a plastic dust house for my chinchilla.

In the beginning, during dust bath time, I’d simply tap on the dust bath. When she came to me, I rewarded her with a small treat.

This ensured she associated that tapping noise with something positive and would respond to this tapping in the future.

Make sure to do this early with your chinchilla, just to get this behavior implanted. You’re going to be thankful you did.

Because in the future, if your chinchilla decides to hide under some furniture or behind something where it’s difficult to find it, simply pull out the dust bath and give it a tap.

Pretty soon, your pet will come out looking for that treat that it has been programmed to expect from your earlier efforts.

It’s as easy as that and 95% of the time, your chinchilla will respond to this training. Trust me, it works great and saves a ton of hassle!

So, let’s recap briefly. Can chinchillas be trained, and are they easy to train?

Technically, yes, chinchillas are easy to train. But only for a limited amount of commands and tricks. You can’t teach a chinchilla tricks in the same way you can a dog or some other animals.

Nonetheless, with a little effort, you can have a relatively obedient chinchilla and a new fantastic family pet.

I wish you the best of luck with your new chinchilla!

What other tricks have you been able to train your chinchilla to perform, that we haven’t mentioned in this post?

What other recommendations can you give the readers to make this process easier?

As always, Chili and I appreciate you stopping by and reading. Thanks again, and we will see you next time.