You are here: Home / General Info

At least not the type of baths we’re used to.

Due to their dense fur, getting wet can cause serious problems for these little rodents. Plus, they come from an area with little rainfall.

As a result, they have adapted to clean themselves by rolling around in dust.

And it is not just a matter of hygiene. It is also one of the chinchilla’s favorite pastimes.

They love their dust baths!

If you own a pet chinchilla, it is up to you to recreate that fun bathing experience in captivity.

But what does the specialized chinchilla dust do to us? Is it harmful?

Keep reading to learn if chinchilla dust is harmful to humans. It turns out it can be. It just depends on the type.

Is Chinchilla Dust Harmful To Humans?

Chinchilla dust is usually not harmful to humans. High-quality bathing dusts for chinchillas are made with natural volcanic ash or pumice sand, both of which are mostly safe for humans and other pets.

However, some varieties of chinchilla dust contain silicate particles. Prolonged exposure to these could cause allergies, asthma, eye issues, breathing problems, lung irritation, COPD, silicosis, and even lung cancer in humans.

That sounds frightening, but again, most varieties are safe. And they will always be labeled as such.

Let’s take a closer look at some reasons most chinchilla dust is safe for humans, before then also looking at why some varieties might pose some dangers to us.

Reasons Most Chinchilla Dust Is Safe For Humans

Here are reasons why most types of chinchilla dusts are safe for humans.

These impurities not only lead to breathing troubles, but could also cause cancer in humans and small animals.

High-quality chinchilla dusts are typically made of volcanic ash, Sepiolite, clay, or pumice. These substances, in their pure and natural forms, do not result in any health issues in most people. Of course, that is only if manufacturers keep them 100% pure.

Pure chinchilla dust settles down very quickly. It does not remain suspended in the air for long. Therefore, most humans will not come in contact with chin dust particles and inhale them.

It is still a good idea to wear a mask and improve the ventilation in the room when handling the dust, or while your chinchilla bathes in it. This can further reduce your exposure to the fine particulates of the dust.

Reasons Some Chinchilla Dust Could Be Harmful to Humans

Certain types of chinchilla dust, especially those made using aluminum silicate, could be harmful to humans. Here are some reasons for that.

Could Cause Diseases In Humans

Aluminum silicate-based chinchilla dust is also called blue cloud dust. As the name indicates, its tiny particles create a bluish cloud when you open the packet, or when your chin rolls around in it.

These tiny particles tend to settle in human lungs. We do not exhale them, because they do not mix with water vapor.

This can result in lung inflammation and irritation. Prolonged exposure to aluminum silicate dust particles could also result in permanent scarring on the delicate lung tissues.

According to OSHA (Occupational Safety and Health Administration), even breathing small amounts of respirable silicate particles could result in diseases such as COPD (Chronic Obstructive Pulmonary Disease), kidney disease, silicosis (an incurable lung disease), and even lung cancer.

Some chinchilla owners having asthma develop breathing issues, even if they simply kiss their chin after it has just had a dust bath.

Chinchilla dust made from fine silicates is very dusty and its fine particles remain suspended in the air, triggering allergy symptoms and asthma-related breathing issues.

Many pet owners report redness, soreness, and dryness of the eyes, with eye-watering, nasal congestion, shortness of breath, and even chest pain, after inhaling blue cloud silicate dust.

In addition to silicates, many impure chinchilla dust varieties contain other harmful ingredients, like arsenic and lime.

Arsenic poisoning can result from swallowing, absorbing, or inhaling the chemical. It can lead to toxicity in humans and animals alike.

Lime dust, when inhaled, could result in irritation of breathing passages, coughing, and sneezing.

What Is Chinchilla Dust Good For?

High-quality chinchilla dust is made with 100% natural volcanic ash or pumice sand. These ingredients are super absorbent and mop off the excess oil and unwanted moisture from your pet’s coat.

With regular use, chinchilla dust can keep your chin’s coat clump and odor-free, healthy, and clean.

Good-quality chinchilla dust is free from additives and impurities like silica or glass powder, limestone dust, and arsenic.

It also has the right particle size to penetrate through your chinchilla’s fur and hair follicles, keeping it nourished and healthy.

Taking regular dust baths is not only good for your chin’s skin and coat, but also for its mental well-being.

Rolling around in dust is what a chinchilla does in the wild as its grooming routine. That is why pet chins also need to take dust baths.

Rolling, flipping around, and burrowing in the soft dust releases feel-good endorphins in your pet, making it feel happier, calmer, and more relaxed.

You can also use used or leftover chinchilla dust as a garden additive, to enhance soil quality and help your plants thrive.

What Is Chinchilla Dust Made Of?

Different brands of chinchilla dust are made using different ingredients. The most common ingredients are the following.

Chinchillas are native to the Andes mountains in South America where they bathe in natural volcanic soil. Many manufacturers of chinchilla dust use this pure volcanic ash for making chin dust. It is a natural and healthy choice of dust for your pet.

Pure aluminum silicate is sold under the name of Blue Cloud dust. This product may have already been discontinued, due to the presence of crystalline silica, which is known to be harmful to humans and pets.

However, there are also aluminum silicate dusts that are formulated to not contain any free silicates. This eliminates the danger to humans. Wither way, if you get a type of blue cloud dust, wake precautions not to inhale it (use a mask, for example).

What Happens When You Get A Chinchilla Wet?

Chinchillas should not get wet. Their fur does not dry quickly and trapped moisture can be very harmful to their fur.

Water trapped under a chin’s thick fur can lead to infections, like fur fungus. Fur fungus is very difficult to treat, because it needs heavy doses of anti-fungal medicines, which come with a plethora of side effects.

Moreover, water baths could stress your chinchilla, because it isn’t used to them. In its natural habitat, a chinchilla only takes dust baths.

Water is obviously not the best way to groom in the dry, cold, and arid environment of the Andes Mountains. It is also quite scarce there.

The stress resulting from a water bath could cause your chin to fur slip. Fur slip is a defense mechanism chinchillas use, in which they release the soggy fur. This can result in patchy hair loss and damage your pet’s beautiful coat.

Furthermore, if the bath water remains trapped under your pet’s coat, it can chill your pet and result in respiratory issues.

As a result, you should never give a chinchilla a water bath, unless you need to remove urine, feces, chemicals, paint, etc. from your pet’s fur.

Dust baths are the only way to groom your chin. Dust baths absorb dirt, oil, and excess moisture and help keep your pet healthy.

If a few drops of water fall on your chinchilla’s fur, it should be okay. A small quantity of water won’t harm your pet but try not to get its entire fur wet.

If you accidentally get your chinchilla wet, dry it with a towel as much as you can. Next, place your pet under a fan or use a hair dryer on a low setting.

Encourage your chinchilla to take a dust bath after it has dried off. This will further help remove all remaining moisture.

How Long And Often Should Chinchillas Take Dust Baths?

You can leave a dust bath bowl in your chinchilla’s enclosure for 10 to 15 minutes. Allow your pet to play, roll, slide, and burrow in the dust.

Remove the dust bowl after 15 minutes. Any longer could strip off the natural oils and make your pet’s skin very dry.

Most chinchillas will play in their dust bowls for 5 to 10 minutes at a time. Never just leave the dust bowl in the enclosure permanently. Your pet might think it is a litter box and use it for voiding.

Limit your chinchilla’s dust baths to 2 or 3 times a week. Any more could dry out your pet’s skin, ears, and fur excessively. Learn more in our article on how to give a chinchilla a dust bath. 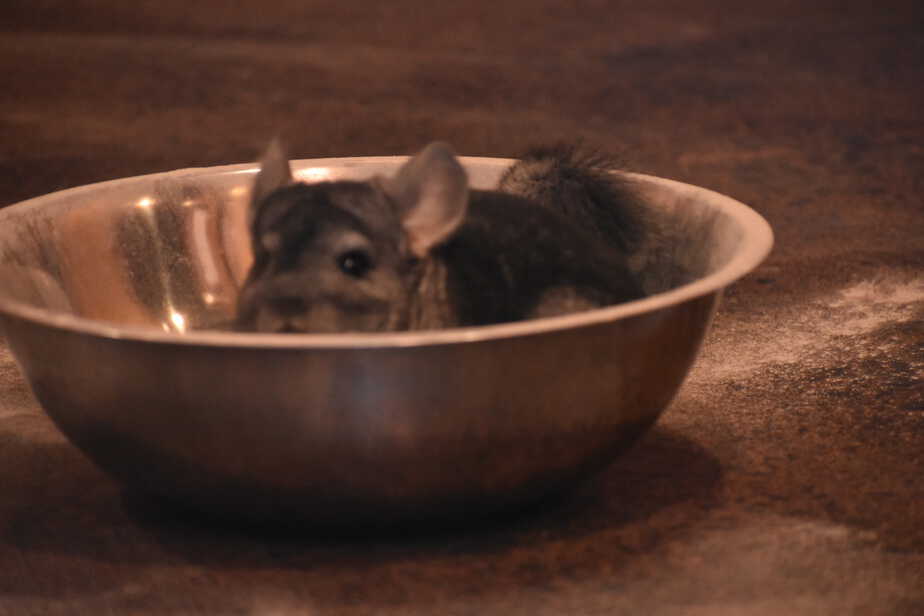 You can mostly reuse chinchilla dust baths three to four times but you must discard it if it appears wet, clumpy, or dirty.

Dust baths or sand baths are only meant for certain birds (sparrows, ostriches, quails, and turkeys) and animals like gerbils, hamsters, chinchillas, pigs, and elephants.

They help remove parasites, dirt, oil, and other trapped debris from fur, feathers, and animal skin.

Animals also take dust baths, because rolling in the soil, sand, or mud transfers their scent and helps mark their territory. A dust bath is an animal’s way of telling its competitors to back off!

Mud baths also help animals like elephants cool off in the oppressive heat, especially in areas where water is scarce.

Humans do not need dust baths because dust baths aren’t the most effective way of removing sweat, odor, oil, parasites, and germs from human skin.

In fact, the dust can get clogged in the skin pores and exacerbate issues like acne, eczema, etc.

Humans also don’t need to mark their territory through dust baths. And in the summer heat, water is a far more effective way for us to cool off than mud.

If you buy the best kind of chinchilla dust, you have nothing to worry about. It is not harmful to humans at all, and it is unlikely to get into your lungs anyway, since it settles quickly.

If you are worried, you can wear a mask when handling the dust, if you are near your chinchilla while it is bathing, and when cleaning up the dust bath house.

However, if you buy the so-called blue cloud dust, you should make sure you always wear a mask when near it. This stuff can be harmful to humans, although many kinds are not. It’s still better to play it safe and wear a mask. We all have them in our house these days, anyway.