In some areas, food made specifically for chinchillas just isn’t readily available.

But rabbit food is.

Or maybe you already own a rabbit and were hoping you could use the same pellets for a chinchilla, too.

Whatever the reason, many owners find themselves wondering if chinchillas can eat rabbit food.

Well, we have the answer. Keep reading to learn whether rabbit pellets are good for chinchillas, plus everything else you need to know about a chinchilla’s diet.

There is no definitive answer as to whether a chinchilla can eat rabbit food, like rabbit pellets. But it is best to avoid rabbit food for chinchillas.

Chinchillas and rabbits have different dietary needs. Feeding rabbit pellets to a chinchilla may result in a lack of specific nutrients that your chin needs.

How much different can chinchilla vs rabbit food possibly be?

Is feeding your chinchilla rabbit food really such a big deal and something you need to avoid?

Luckily, I plan to answer those common questions in today’s post.

The rest of this post will explain why rabbit food and rabbit pellets are not your best option for ensuring the proper diet and long, healthy lives for your chinchilla.

Why Your Chinchilla Should Not Eat Rabbit Food

Will a chinchilla eat rabbit food or rabbit pellets?

I’m also aware that rabbits are a more popular pet and that many chinchilla parents simply have easier access to rabbit pellets than chinchilla pellets.

I have even run into this issue at certain pet stores in my local area.

Rabbit accessories, including food, are easier to come by, because rabbits are not considered exotic pets. They are just more popular to raise and own in general.

But it doesn’t matter. You should still avoid rabbit pellets, or any type of rabbit food and not feed them to your chinchilla.

The same goes for food meant for other rodents. Read “Can Chinchillas Eat Guinea Pig Food?” for more.

Chinchillas should be consuming nearly 80 to 90% of their diet in the form of hay. The best chinchilla hays can include timothy hay and orchard grass, among others.

I have a full guide about the best chinchilla hay that you can see here.

When you struggle to find chinchilla pellets or food designed for your chinchilla specifically, you should lean towards other options such as ordering online.

Plenty of food options designed for chinchillas are available online from stores like Amazon. 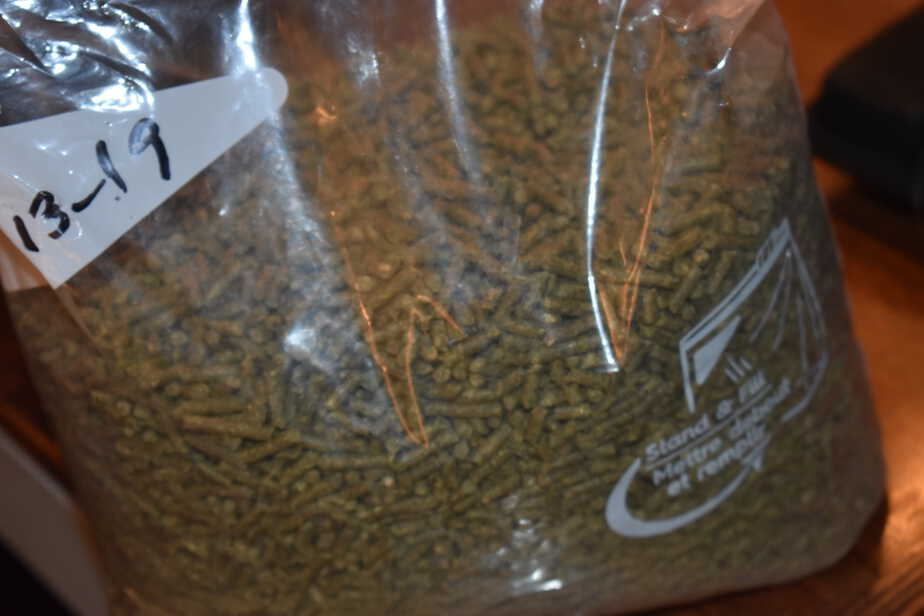 This is about as straightforward as it gets. Chinchilla pellets are designed for chinchillas for a specific reason.

Chinchillas, like other rodents, have a small, sensitive stomach and digestive tract that can both react poorly to specific food combinations.

Too much sugar, for example, can be a disaster. Too much of anything can turn into an issue in all honesty.

Chinchillas need a blend of protein, fiber and need the ability to file down their teeth to remain healthy and to avoid issues.

Treats that are made for rabbits and pellets or other food mixes for rabbits are things to avoid when feeding your chinchilla. You should also avoid things like salt licks.

If you can’t find the pellets needed for your chinchilla at a local store, simply order them online instead.

The same goes for Timothy hay. But in most circumstances, you won’t run into this issue of not being able to pick up the hay locally.

Nonetheless, here are the specific pellets I feed my chinchilla.

Additionally, I use this timothy hay for my chinchilla.

The links above are the exact same options I provide my chinchilla, and I can tell you that this far into being a chinchilla parent, I’ve never experienced any issues.

They are also the recommendations that were provided to me from the chinchilla breeder when I first adopted my chinchilla.

I’m not claiming that other options don’t exist. I just haven’t tried them all. They might be just as good, but I can assure you that the two options above are 100% safe and my chinchilla does excellent with them.

Are Any Rabbits Foods Safe For Chinchillas?

When it comes to other items that people feed their rabbits, some of them may be safe for chinchillas. But not most.

For the most part, chinchillas shouldn’t eat a vast majority of fruits. But some are okay (that link will tell you which ones). Not if they are fresh though.

Fresh fruits and fresh vegetables are never okay for a chinchilla and cause issues such as diarrhea and other serious illness.

If you do give your chinchilla fruits, it should always be a minimal amount and not on a frequent basis. This also applies to vegetables.

Others Dos and Don’ts With A Chinchilla’s Diet

Outside of understanding that your chinchilla should not eat rabbit food or rabbit pellets, it’s essential to understand a few other basics.

In general, your chinchilla should be sticking to virtually nothing but hay and chinchilla pellets. It is possible to give some treats, but keep it to a minimum and do not give them often.

Don’t try fruits or vegetables of which you are not sure. In fact, don’t try any food that you are unsure of with a chinchilla.

Chinchillas can develop stomach issues very quickly and sticking to the correct diet is always imperative for chinchillas to live long, healthy, and balanced lives.

This leads me directly into my final tip when it comes to feeding your chinchilla the right foods, treats, and miscellaneous items.

This may be the most important tip I can provide you. Never trust the pet store or pictures that are placed on treats, foods, and other items.

Take the time to read the nutrition labels and ingredients. Even speak to a vet if you are unsure.

If you haven’t noticed, it’s part of the evil marketing plan that these companies use to entice more purchases.

Many treats and foods in the pet stores that are safe for some rodents, also have images of chinchillas on the bag.

This means absolutely nothing and using these for your chinchilla could be reckless and cause issues. Stick to the pellets with a high concentration of fiber and protein and keep sugar to a minimum.

Once again, do not trust the pictures or wording on treats or other foods you see online or at the pet store.

Ensure you read the label and understand what you are feeding your chinchilla before actually feeding it. Period.

To recap, avoid rabbit pellets for your chinchilla. Instead, buy chinchilla formulated pellets with the right ingredients and use online resources if you can’t locate the right pellets and hay at your local pet stores.

I use online stores all the time and never have issues. It’s that easy and shouldn’t cause any additional budget or trouble for you.

Making sure you provide the right food increases your chinchilla’s health, happiness, and longevity.

It’s that easy, and I wish you luck with your upcoming adoption and new journey at becoming a chinchilla parent.

Now let’s hear from you!

Have you used rabbit pellets or rabbit food for your chinchilla in the past?

Can chinchillas and rabbits live together? Have you been able to pull this off successfully?

Do you feel that anything was left out of this post that chinchilla owners need to be aware of when offering rabbit food or rabbit pellets to their chinchillas?

Do you have any other insider tips and tricks you can share with the rest of us?