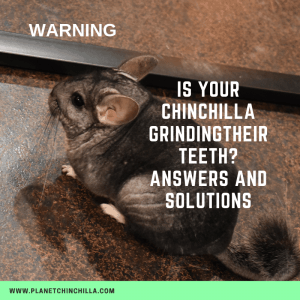 As chinchilla owners, I think we can all openly admit that our chinchillas will often do things that throw us for a loop or have us concerned. I know my chinchilla certainly does. Most of the time, the things our chinchillas do are enjoyable, bring smiles to our faces and are a primary reason that makes chinchillas such a great family pet to own.

On the other hand, our chinchillas can do things that raise red flags. Recently, in communities and forums, I noticed people asking something specific. Why do chinchillas grind their teeth? I’ve owned a chinchilla for quite some time now and wanted to take the time to chat about this topic.

Now, when I say “get to the root of the issue” I’m referring to double checking what the potential cause and reason for your chinchilla grinding their teeth may be. While it may be for fun like stated previously, it could also indicate something more serious.

That’s what this post is all about. If you stick around for a moment, I want to walk you through some steps and actions you can take to help determine what’s causing your chinchilla to grind their teeth. Let’s dive into those details now.

While chinchillas are one of the most social and friendly creatures we can adopt and own, this doesn’t stop them from sending us mixed signals from time to time. Often, after owning a chinchilla for a long time, things become easier to understand.

However, circumstances still arise when it’s not always so easy to figure out why your chinchilla is doing one thing or another. Grinding teeth is undoubtedly one of these behaviors which can leave new or experienced chinchilla owners confused and not sure what to do next.

Again, we have a few common reasons why chinchillas will choose to grind their teeth. Here’s a look the reasons I’ve compiled from owning my chinchilla or from additional research and speaking with other chinchilla owners in Facebook groups or online communities.

These are the top 4 reasons I’ve put together.

Top 4 Reasons Your Chinchilla Will Grind Their Teeth

Below, I plan to illustrate the top 4 reasons your chinchilla may be grinding their teeth and then provide a detailed summary and give possible solutions you can try to put an end to the teeth grinding.

Stress can be the primary reason why your chinchilla is grinding their teeth. This can also be for several different reasons. It usually will occur when adjusting to a new environment.

When this takes place, do your best to comfort your chinchilla. Get your chinchilla out of their cage and interact with them as much as possible. Attempt to interact and handle them in calm manners. Don’t fear or stress about handling and interacting with your chin, a chinchilla will not bite in most circumstances (although it is possible).

Take Things Slow and Give It Time

Additionally, allow them to get to know their environment more frequently. Maybe for the first few weeks, you clean their cage more often and let your chinchilla come out for dust baths during this time.

The more your chinchilla can get used to their environment, the sooner you can put an end to the tooth grinding if this is, in fact, the direct cause that your chinchilla is grinding their teeth in the first place.

Additionally, give your chinchilla time in this situation to allow their anxiety and stress levels to drop. Sometimes it happens very quickly, and sometimes it can take weeks or even months. Respecting your chinchilla’s space and feelings during this time is imperative.

Now for the bad news. Sometimes your chinchilla will grind their teeth due to an illness or overgrown teeth issues. Therefore, it’s so important always to allow your chinchilla the ability to chew.

Chewing on chinchilla safe toys is what will enable chinchillas to naturally grind their teeth down and keep their teeth healthy.

If your chinchilla isn’t grinding their teeth and you are merely completing early research in case it ever happens in the future, you can help avoid this problem providing your furry friend some safe chinchilla toys to chew in their cage. Hay cubes and wood sticks are some of the chinchillas most desired items to chew.

Just be careful when they are out for playtime. Chinchillas love to explore, jump and climb. You need to make sure the room is safe, and your chinchilla can’t access dangerous items that they could chew such as electrical cords or wires.

Lastly, if your chinchilla is grinding their teeth and you don’t believe it’s a tooth issue but some other pain causing the grinding, you need to contact a vet. Chinchillas with illnesses tend to get worse more rapidly, so it’s essential to be proactive.

Chinchillas will not emit odor unless this is the circumstance. Chinchilla’s poop and pee like other rodents but they remain odorless if you take care of them and clean their cage an adequate amount of times per week.

Chinchillas are very social and friendly animals and can get bored or irritated with you quickly. If you notice your chinchilla grinding their teeth, with no odor and see no other behaviors from your chinchilla, it could be no one’s fault except your own causing your chinchilla to grind their teeth.

Now, this reason resembles reason number #3 in many ways. We just discussed how your chinchilla may be grinding their teeth because they aren’t being socialized or interacted with enough.

Now, let’s assume you are getting your chinchilla out for playtime and making them do all their natural chinchilla type behaviors.

If this is the case and you notice teeth grinding during specific interactions such as when you attempt to hold your chinchilla, they may be sending you a message that they are annoyed.

Don’t’ take this the wrong way. They love you and recognize you as the owner, but they have things to do when they are out for playtime.

They want to jump, climb and explore during their short spurts of time out of the cage. If you keep interfering with what they want to do, they may only be letting you know a straightforward message “I love you, but I have things to do.”

If this is the case, let them out in a safe area and let them do their thing.

How to Easily Tell Which of the 4 Reasons Is Causing Your Chinchilla to Grind Their Teeth.

Unfortunately, chinchillas aren’t that easy in this respect. Now, don’t get me wrong. Chinchillas are a straightforward animal to care for but recognizing body signals and body language can be a bit trickier with chinchillas.

The easiest way I can think of to narrow down the cause for teeth grinding is to pay attention to your chinchilla’s odor and behavior.

If your chinchilla is emitting an odor, sleeping more than average or seems agitated much more often than usual, there is a strong likelihood that it’s time to contact your vet and take your chinchilla in for a visit. It could be something more serious going on with your chinchilla if this is the case.

However, if your chinchilla is behaving normally, eating, drinking water, pooping and nothing much has changed, it’s likely it’s one of the other three reasons causing your chinchilla to grind their teeth.

Final Word, Chinchillas Can Sometimes Be Confusing, but Teeth Grinding Isn’t Something to Panic Over

Like I’ve stated during this entire post, chinchillas can be challenging to understand with certain behaviors. It’s the nature of owning a chinchilla, and they are still undoubtedly excellent animals to own. I have no regrets about owning my chinchilla.

Simple google searches will usually provide you all the information you need to remain an ethical and great chinchilla owner. Be willing to find the root of the problem and adjust your routine to attempt to put an end to teeth grinding with your chinchilla. However, I’d also like your thoughts on this topic

Does your chinchilla grind their teeth? If so, what was the cause and how did you fix the problem? Be sure to share your stories and drop your comments below. As always, I appreciate you, thanks for stopping by and I will see you next time.

link to Can Chinchillas Eat Bread? [Follow This Advice]

Providing the best chinchilla diet possible for your new pet is a critical piece of being a new chinchilla owner and parent. It is part of understanding how to take care of a chinchilla and...

Continue Reading
link to Is It Cruel to Keep A Chinchilla?[Not If You Do This]

When searching for the next family pet, you may have plenty of doubt and questions about which pet is best and what you can expect. Chinchillas are no different, and individuals considering...

Thanks for Visiting Planet Chinchilla. My Name Is Josh and I have a 4-Year-Old Female Chinchilla named "Chili". Planet Chinchilla Was started to share our journey with all of you. I'm also the Author of the Digital Book "Ultimate Chinchilla Care Guide, From Adoption and On" That you can see below or by visiting the E-Book Store.

The Ultimate Chinchilla Care Guide, From Adoption and On eBook

Visit The Information Page For This Book Here