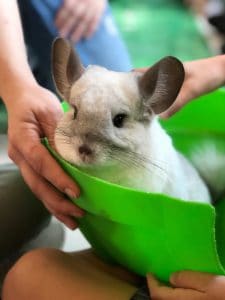 If you have recently adopted a chinchilla, it’s 100% common that you have asked yourself “how often should I play with a chinchilla”?

It’s not like we know the correct answer right out of the gates.

The fact you are even asking it shows you are an ethical chinchilla owner.

I asked myself the same question and have now owned a chinchilla for a long time.

Here is what I can tell you on this topic.

So, how often should I play with a chinchilla? You should be playing with a chinchilla once per day for 30-60 minutes depending on your schedule. Chinchillas are social creatures and need time out of the cage daily. A chinchilla not being played with for long durations and cause stress or depression.

While this may seem like a big commitment, there is some positive news that we will discuss.

I understand that and it’s why this blog post exists.

So, before you stress for too long, let’s dive into the details.

Here is what you need to know.

You’re already aware that you should play with a chinchilla every day for 30-60 minutes.

However, the question of “how often should I play with a chinchilla” is somewhat misleading.

First, you don’t necessarily have to be 100% devoted to your chinchilla during playtime.

Yes, you should be around and at least be supervising in some fashion.

However, you don’t need to be rolling around in the dust bath with your chinchilla.

Sometimes, I even write these blog post while my chinchilla is out and jumping around.

Once your chinchilla has fully adapted to their environment, things get easy.

I use my basement that’s decent-sized to allow my chinchilla to play in while I’m around.

I even skip a day every now and then if my calendar is too demanding.

This is perfectly fine and it’s crazy to think it won’t happen to you.

Play with Your Chinchilla Daily but Don’t Stress Over It

I think this was made clear previously in this post, but I wanted to make sure to hit on it one more time.

Should you be playing with your chinchilla daily?

Is it the end of the world if you can’t do this?

Work out a system that works for you.

Often, mine involves allowing my chinchilla out to play daily Monday through Friday.

However, I must skip the morning playtime often on Saturdays for family obligations.

Instead, I get my chinchilla to run around before bedtime or sometimes skip it altogether.

On Sunday mornings, I attempt to make up for it by allowing her extra time out.

I’ve never had an issue using this approach and I don’t think you will either.

The main takeaway is that trying to do it daily is enough to keep your chinchilla happy.

The skipped day is going to ruin the bond or cause your chinchilla to slip into a depression.

I have a few out of the box options for you in case you can’t always play with your chinchilla daily.

One of those solutions is to simply have your chinchilla cage in a room where you will be frequently.

For me, this was my home office.

My chinchilla cage is right next to my desk.

While this won’t work for everyone, I think it helps my chinchilla to bond with me knowing I’m around.

I’m on the phone often for work so just hearing my voice all day long I would say is positive.

Additionally, in between task, I can simply pop open the cage and pet her as much as I can.

It is however imperative that if you take this approach that you ensure the room is at ideal temperatures.

Let’s assume that you originally adopted your chinchilla and had plenty of spare time.

If this is the case, and your time has recently become much more limited, you have another solution.

Simply adopt another chinchilla and put them through the bonding phase.

While this doesn’t excuse you from you playing with your chinchilla as much as possible, it can surely help to reduce some of the playtime if necessary.

This makes it imperative to keep them socialized, mentally stimulated and them feeling loved.

If this happens to require you getting your chinchilla another cage mate, then go for it.

This isn’t a bad approach by any means either.

Many chinchilla owners own at least 2 chinchillas for this reason.

Well, this reason plus it’s tough not to want a second a chinchilla once you have your first.

Always remember, however, chinchillas do not always do better in pairs.

Let the Family Help Play with the Chinchilla Daily

My last key tip that you can implement is simply getting creative or letting family help you.

My two-year-old son loves playing with my chinchilla.

Of course, he can’t do so alone.

Even with a chinchilla proofed room, you don’t want a kid this young handling the duty.

Chinchillas will chew wires, and this can be dangerous if you are not supervising.

However, it’s a nice bonus that I can spend time with my son while getting my chin out of the cage to play.

Little things like this can relieve some of the time demands that chinchillas need.

Let a brother or sister step in and teach them how to pick your chinchilla up.

In fact, if they need help just have them refer to my post about picking chinchillas up by the tail here.

They shouldn’t have too many problems adjusting and learning the technique.

A little bit goes a long way with chinchilla so just ensure you try your best and you will be fine.

Play with Your Chinchilla Daily If Possible, If Not, Do Your Best and Forget the Rest

As we have covered in this post, playing with your chinchilla daily is a fantastic way to build a bond.

It’s also a fantastic way to keep your chinchilla happy.

So, how often do you need to play with your chinchilla?

Daily is the best recipe for success with chinchillas.

However, when this can’t happen, there is no need to beat yourself up over it.

Everything will turn out just fine.

I’ve been there and figured it out along the way.

Turning the Floor Over to You.

This is when I encourage the readers to chime in their two cents on the subject.

Do you believe chinchillas need to be played with daily?

Do you have any specific recommendations that we haven’t discussed in this post?

As always, thanks for stopping by.

Catch you next time.

link to Can Chinchillas Eat Bread? [Follow This Advice]

Providing the best chinchilla diet possible for your new pet is a critical piece of being a new chinchilla owner and parent. It is part of understanding how to take care of a chinchilla and...

Continue Reading
link to Is It Cruel to Keep A Chinchilla?[Not If You Do This]

When searching for the next family pet, you may have plenty of doubt and questions about which pet is best and what you can expect. Chinchillas are no different, and individuals considering...

Thanks for Visiting Planet Chinchilla. My Name Is Josh and I have a 4-Year-Old Female Chinchilla named "Chili". Planet Chinchilla Was started to share our journey with all of you. I'm also the Author of the Digital Book "Ultimate Chinchilla Care Guide, From Adoption and On" That you can see below or by visiting the E-Book Store.

The Ultimate Chinchilla Care Guide, From Adoption and On eBook

Visit The Information Page For This Book Here