You are here: Home / Habitat

There are some things every single chinchilla loves.

Hammocks are not one of those things.

No chinchilla hates hammocks, but some are certainly far more enthusiastic about them than others.

Does that mean you should not get a hammock?

No, it doesn’t. They are cheap and it’s worth getting one and trying it out.

Keep reading to learn what kind of hammock is best, how to install one safely, and how to see how your pet feels about its new hammock. Plus everything else you need to know about chinchillas and hammocks.

Yes, chinchillas like hammocks. They use them to sleep inside and also to climb and play. But not all chinchillas are the same. Some will enjoy hammocks much more than others.

Chinchillas all have unique personalities. It is one of the traits that makes them such a unique pet. They are a bit crazy and super social, and they all have their individual likes and dislikes. And they can be quite picky at times.

That said, just about every chin will enjoy having a hammock, which is why  always recommend getting one. But some chins will enjoy their hammock much more than others.

The rest of this post will go into hammocks for chinchillas much more, helping you find the best chinchilla hammocks and making sure you know how to give your pet a hammock in a safe manner. 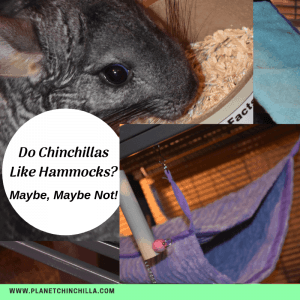 😕Adopting and caring for a new chinchilla can be intimidating and confusing. But it does not have to be.

Be sure to check out my full digital eBook “Avoiding Critical Mistakes: Ultimate Chinchilla Care eBook” to get the best advice, tips, tricks and supply recommendations to make adopting and caring for a chinchilla much more comfortable and easier to understand.

As mentioned a moment ago, some chinchillas love hammocks and use them all the time, while others may not use theirs very often at all. The only way to know is to get a hammock and see. Luckily, they are very inexpensive.

I currently have a hammock in my chinchilla’s cage, and she has been pretty neutral about the hammock, to say the least. When I first put the hammock on the top tier of her cage, she was interested.

This makes sense because chinchillas are naturally curious and like to climb and jump around. Especially when they sense something new in their cage that they can interact with, use, or jump on top of.

It’s just the way chinchillas are naturally structured to act and the way they act in the wild.

However, after the initial excitement died off, my chin mostly ignored the hammock. This is when you begin to see what’s going to stick with your chinchilla and what things it will no longer care about after a few days.

At this point it makes sense to go into a bit more detail on the story of my chinchilla and her nice, fresh, new, purple hammock.

How My Chinchilla Responded To Her Hammock At First

We all sometimes fall into the trap of thinking that any money we spend on our chinchillas will result in them loving us that much more and that they will enthusiastically use their new toys every day.

While my chin loves most of the items I place in her cage, she doesn’t have those same feelings for her hammock.

The good news is that she does at least use it sometimes. Occasionally I catch her sleeping in it, but it is rare.

But I’ve found another good use for it that she seems to enjoy.

I sometimes place hay cubes inside of the hammock. She will then get in, chew on her hay cube, lay some poop nuggets, and then go about her day.

For those of you that may be newer to chinchilla parenting, it’s important to know that chinchillas poop frequently.

That’s basically what my chinchilla has turned her hammock into. One of her bathrooms.

It’s almost as if she likes to lay inside of her hammock for privacy, do her business, and then jump right back out and begin climbing on all the other shelves I have throughout her cage.

However, I am missing the key point with this post so far. And it is a simple point.

Chinchillas need fun, large, and interactive cages to accommodate their natural behaviors. A hammock is just part of this equation.

I can tell you that I am a fan of the hammock that I currently use for my chinchilla. It is very safe and I think other chinchillas would really love it. And not just as a toilet.

I currently use the Nite Angel Hammock for my chinchilla and strongly recommend it to anyone else considering a hammock for your chinchilla.

Niteangel Luxury Double Bunkbed Hammock
5.0
$14.95 $13.95
Pros:
Cons:
View on Amazon
We earn a commission if you make a purchase, at no additional cost to you.

It is budget-friendly enough that if your chinchilla decides it is not a hammock fan, you are not out much money. And at least you tried.

Not to mention, they attach easily to the cage. I am fine with the idea of my chin using it infrequently. And mostly to poop in.

Your Chinchilla May Not Use A Hammock At First

As stated moments ago, chinchillas don’t necessarily jump for joy at every new item you put in their cage.

Every chinchillas loves having a hiding box. It is something the absolutely need, actually.

Shelves are always a great addition, too. All chinchillas love to jump and climb. Chew toys are another huge hit with every chin.

But other items, like hammocks, may not yield the same results and not get the same amount of use. It differs a lot from one chin to another.

But this does not mean you shouldn’t get your chin various items, like a hammock. You never know. You chinchilla might absolutely love them.

As I was saying before, it’s luck of the draw. Your chinchilla may love their hammock.

Just be sure to keep an eye out for a few things.

First, always make sure that your chinchilla is not chewing its hammock. Ingesting certain items can cause significant issues, like blockages.

Secondly, just watch and see how your chinchilla interacts with and enjoys the new hammock. You never know.

It’s completely possible that you end up with a chinchilla that decides to sleep in the hammock for multiple hours at a time. I know plenty of chinchilla owners who have reported this happening with their pets.

A final piece of advice I can give you is to ensure that your chinchilla has access to get inside of the hammock.

I know, I know. Chinchillas are master climbers and jumpers.

But I still prefer to make this easy on my chinchilla, by having one opening of the hammock right in front of one of her shelves.

I say “one of”, because I like to scatter shelves and items to play with all over the cage for her, just to keep her happy and moving around as much as possible.

If you haven’t bought a cage yet, or if you want to upgrade, I highly recommend the Critter Nation 2 cage for your chin.

It’s the best chinchilla cage you can get and the one I use, after having tested a number of others (you can see the results of those tests by following the link at the beginning of this sentence.

It’s nice and spacious and allows your chinchilla to jump around freely and have plenty of space to be the crazy chinchilla it was meant to be.

It’s even large enough to allow you to adopt a second chinchilla in the future. That’s my plan in the next few months.

I just haven’t found the perfect fit yet to pair with my current chin, otherwise I would already have my second fur baby.

I strongly believe in being as social as possible with our chinchillas and, when possible, giving them a cage mate to keep them company for their entire lifespan.

Do chinchillas like hammocks? In the end, the answer is: it depends.

Your chinchilla may love having a hammock and use it frequently. Or it may decide that a hammock is not worth its time.

You never know what’s going to bring joy and excitement into your chinchilla’s world.

As I said, for me, the hammock definitely was not the best gift I have purchased for my chin, but she still uses it enough to justify keeping it in the cage.

Go ahead and get a hammock and see how your chinchilla responds. It may surprise you.

Chili and I wish you the best of luck with your new chinchilla and your attempt to find the best hammock possible for it.

Share your thoughts and stories about your chinchilla and hammocks.

I’d also love to hear all your stories about purchasing a hammock for your chinchilla.

Does he or she sleep in it?

Or does it use the hammock just to hang out like my chinchilla? Or even use it as a private restroom?

Be sure to share your stories, questions, and concerns below.

As always, Chili and I appreciate you stopping by and reading today and we will see you again next time!