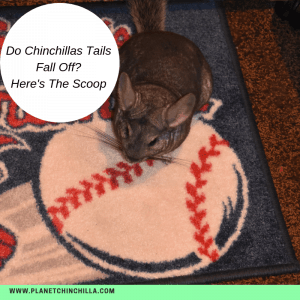 When it comes to you becoming an ethical pet owner, it’s essential to understand the specifics about your pet you currently own or that you are presently looking to adopt.

Chinchillas are no different and often, individuals on my blog or social media will ask specific questions.

Recently, a new off the wall style question popped up that I wanted to address.

Do chinchillas’ tails fall off? Here is what I can tell you on this topic.

Keeping this information in mind, my hopes and my prediction would be that you are curious about what would cause damage or injury to your chinchilla tail.

Additionally, I would hope that you are curious about proper handling techniques to avoid these issues in the future.

As mentioned previously, chinchillas are fragile and need proper handling, but they are not necessarily that fragile.

You should never pull or yank a chinchilla’s tail to gain control of them, but you do have other options.

While strolling forums and other communities filled with other chinchilla owners, I have noticed quite the concern on this topic.

I do understand that chinchillas do have fragile tails in the sense that they can be sprained and yes, the tip of the tail can break off under extreme duress.

This is one of the reasons you should only be handling your chinchilla by the base of the tail where the chinchilla’s tail meet’s their rear end.

After gaining control of your chinchilla in this fashion, you can bring your other hand beneath your chinchilla’s body supporting their legs and their torso and bringing them in closer to your body.

Using this technique is going to help avoid the possibility of doing any physical harm to your chinchillas’ tail.

Once you have control of your chin, you can release your grip from the base of the tail and hold your chinchilla in a normal fashion.

Sometimes Other Chinchilla Mates Can Injure A Chinchilla’s Tail

I’ve also noticed a common theme with individuals having these fears, concerns and experiencing injuries and wounds to their chinchillas’ tails.

Although it’s rare for this to happen, it is possible that two chinchillas living as pairs may fight in a sense that an injury could cause a wound or a portion of the tail to be missing.

Unless you physically witness this happen, you won’t have any real proof this is the cause of the injury, but chinchillas can fight at times.

In most circumstances, this will not happen.

Like I stated previously, chinchillas fighting is more rare than typical, and chinchillas also don’t typically go after each other’s tail.

In most circumstances, two chinchillas fighting would more likely cause a fur slip before a missing chunk of the tail would occur but with how much these furry friends like to climb, jump and chew, anything is possible.

Any trouble a chinchilla can get in when bored and when not given a chance to be mentally stimulated in a large enough cage or by being afforded playtime will likely find a way to get creative doing things that they possibly should not be doing.

To understand exactly how often to clean a chinchilla cage, make sure to read my other post a few words back for more details.

Additionally, anything you can do to avoid other metal grate bottom such as using fleece liners can help eliminate injuries to your chinchillas as well.

If you have concerns, you can read about if fleece is safe for chinchillas here.

It details the exact fleece liners I use and why I swear by them.

Although the metal bottoms only cause pain overtime to your chinchilla’s feet in most circumstances, you just never know with these guys and what positions they will find a way to get themselves into it.

Chinchilla’s are fun animals that can reach crazy places in a room when playing and they perform the same whacky behavior in their cage.

If their tail happens to slip between two bars or gets caught on something, it’s possible it could break or injure their tail in the process.

What You Should Do If You Notice a Wound, Missing Area or Blood on Your Chinchilla

Sometimes we can’t be around to witness what caused an injury to our chinchilla’s.

This can be true of any pet, and we can’t always have eyes everywhere.

In most circumstances, you are likely to check on your chinchilla or approach them to get them out for playtime when you do notice an injury or wound.

If this is the case, it’s essential to schedule a visit to your vet.

Don’t attempt to allow a chinchilla injury or wound to heal on its own.

Unfortunately, a regular vet likely won’t do the trick either as chinchillas are an exotic rodent and have special needs.

The worst thing you can do is allow your chinchilla’s injury to get worse or develop into an infection.

You see, when chinchilla’s get sick, the illnesses escalate quickly and can fall very ill very quickly due to their size and general nature.

With wounds or anything to your chinchilla that have the chance or that are prone to infection, it’s vital to have a professional treat the wound and recommend the next steps.

Ensure Your Chinchilla’s Are Bonding Well, and You Always Check In

One of my last pieces of advice I can give you is always to keep the tabs on the situation.

Especially if you have two chinchilla’s living together.

Sometimes what started as a great bonded relationship can quickly turn sour.

One thing to do is always to ensure your chinchillas have plenty of space and the essentials within their cage.

You can read about what a chinchilla needs in their cage here for more information on the topic.

Outside of this, chinchillas are just as easy as any other pet to own and they, in my opinion, make for one of the best pets that you can choose to adopt.

Don’t beat yourself up over it.

Call your vet and get your chinchilla back to top-notch health.

Putting It All Together, Chinchilla’s Tails May Be Fragile, but It Takes Force to Cause Injury

So, as a last reminder, do chinchilla’s tails fall off?

No, not out of the blue.

Chinchilla’s can have injuries to their tails causing breaks, loss of some of the tail or sprains but a chinchilla’s tail would require force or mishandling to have visible injuries or the chance of losing any of their physical tail.

With proper cages, proper supervision and some diligence, it’s likely you will never experience any injuries such as this occurring to your chinchilla.

I’d love to hear your stories on this topic as well.

Have you ever had or experienced your own chinchilla going through a tail injury? What happened and how did you remedy the situation?

As always, thanks for stopping by and reading.

I appreciate you and will see you next time.

link to Black Chinchillas[Facts, Pricing, Options and How to Find]

One of the first things individuals considering purchasing a chinchilla needs to consider is the color and mutation of the chinchilla they prefer, which certainly includes black chinchillas. It is...

Sometimes our chinchillas make a sound or a noise that we do not understand and recognize. Especially if we are new to owning a chinchilla and haven't had as much time to get used to all of the...

Thanks for Visiting Planet Chinchilla. My Name Is Josh and I have a 4-Year-Old Female Chinchilla named "Chili". Planet Chinchilla Was started to share our journey with all of you. I'm also the author of the Digital eBook "Avoiding Critical Mistakes Ultimate Chinchilla Care Guide, From Adoption and On" That you can see below or by visiting the E-Book Store.

Visit The Information Page For This Digital eBook Here