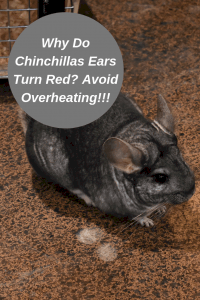 Owning a chinchilla can come with many questions and fears. Especially when you first adopt a chinchilla. Don’t worry; however, most of them are just the beginning phases of owning any pet when we aren’t quite sure what to do in certain circumstances. Don’t let my opening line turn you away from adopting a chinchilla. They are friendly and loving pets and a complete joy to own for the entire family. That doesn’t mean however that we don’t run into questions and concerns along the way. For me, I had a question about the inside of my chinchillas’ ear. Why do chinchillas’ ears turn red? After owning a chinchilla and learning the ins and outs that come with that, here is what I can tell you on this topic.

So, why do chinchillas ears turn red? Chinchillas are capable of overheating very quickly. Chinchillas also have one of the densest furs out of any land animal. Additionally, chinchillas can’t sweat but can excrete or release heat through their ears. When they do this, the blood vessels become visible in your chinchillas’ ears.

I know this may seem like something to be frightened over, but it’s not. It’s very easy to avoid, and we are lucky that are chinchillas at least present us with this physical sign that they may be overheating.

This allows us to effectively take active steps in ensuring we get our chinchillas calmed down and back to a relaxed state to avoid overheating.

If you stick around for just a moment, I wanted to break down everything you need to know about your chinchillas’ ears turning red and some active steps you can implement to ensure you aren’t running the risk of overheating your chinchilla. Hopefully, this post can serve as a learning experience.

Ultimately my goal is to make all of us more ethical chinchilla owners throughout this website and all of my post. Let’s get started and discuss the red ears your chinchilla may present from time to time. Here are the details.

Like I stated previously, your chinchillas’ red ears can be a telling sign if they are too hot. Chinchillas do not possess the ability to sweat like other animals are capable of. Also, a chinchilla’s fur is extremely dense with over 80 hairs per follicle. This makes the concept of overheating that much more likely.

Since your chinchilla can’t sweat, they release heat through their ears. When they do so, it becomes easy to see the veins enlarge and the skin on the ears may turn pink or red. This is an indication that you need to cool your chinchilla down one way or another.

It’s essential that when you notice this, you spot check the temperature and ideally, you want the room to be under 70 degrees and over 50 degrees. Once you start passing 70 degrees, you run the risk of your chinchilla overheating and potentially even passing away.

Chinchillas simply just can’t handle heat and humidity well. They aren’t naturally meant to do so and in their natural environments, they deal with very little rain and very mild temperatures which allows them to survive. Always be sure the room you keep your chinchilla in is at the correct temperatures.

Other Things You Must Do If Your Chinchillas Ears Are Red

Now that we understand we may have our chinchilla in a position to overheat we have a few additional steps we need to take to protect our chinchillas and make sure they are okay.

First and foremost, if your chinchilla begins showing signs of overheating or red ears, it’s time to end play time if that’s currently when you are spotting this issue.

Secondly, you need to get ahold of your chinchilla and feel their ears to ensure that they are in fact just hot and need to cool down. It’s also been known that chinchillas’ ears may turn red if they are in deep sleep or resting.

Additionally, some of the lighter colored chinchillas appear to have more of a red or pink tint to their ears more easily and more frequently than some of the darker breed chinchillas. Double checking to see if you can feel any heat will help narrow down the issue for even further.

Next, if your chinchilla ears are red and you are positive, they are just hot, grab a damp cold cloth and gently touch to it to their ears to cool them down.

Also ensure they have plenty of cold water and nobody is around making them jump, climb or remain in an active state so you can bring their body temperature back down.

If you are struggling to get ahold of your chinchilla or you are new to owning a chinchilla, refer to the base of tail pickup technique for assistance.

It’s the easiest way to get ahold of your chinchilla if they continue to run away or hide in corners from you.

Adjust If Necessary, To Keep Your Chinchilla Safe in The Future

Since I’m not aware of the exact circumstances that placed your chinchilla in a possible state of overheating, it’s hard for me to narrow down what may have caused it and how to fix it. I can, however, try and touch on several items to make sure you do go forward.

First and foremost, if the room your chinchilla is kept in is too hot, simply change places in your home and ensure you have the correct temperatures for him or her to remain safe.

Additionally, if it was playtime or another family pet scaring your chinchilla or causing them to run around, be sure to isolate the animals so this doesn’t happen in the future.

Next, consider something such as a dehumidifier to keep humidity out of the room where your chinchilla sleeps and has their cage placed in.

This alone can remove the sticky factor in the air and help prevent your chinchilla from overheating in the future.

Other Random Tips to Keep Your Chinchilla Safe and Healthy

The tips we have discussed thus far into the post should help you dramatically to keep your chinchilla safe. The temperature of the room alone is probably the most significant factor to keep in mind outside of worrying about the wires and other dangerous items in the place that your chinchilla may decide to bite or chew on.

That’s okay. Do your best, and as time goes on, you will become a better chinchilla owner. Sometimes we just need some help and practice to get these things down. Rome was not built in one day. Additionally, don’t be afraid of moments like these.

They happen. All the time with all pets. Chinchillas are friendly loving animals and extremely incredible to own as pets. I don’t want something like the potential of overheating potentially swaying you into thinking chinchillas are too high maintenance to care for because that’s 100% false.

They are perhaps one of the most relaxed animals to care for if you are wanting my honest opinion.

My last few pieces of advice are never to use fans to cool your chinchilla down. Not only will this not work but it can also make them very sick. The air blowing on them will not be enough to cool them down due to their thick coats of fur.

The only outcome you can gain from blowing a fan at a chinchilla is either illness or no results at all so definitely do not attempt to do this. Lastly, do not get your chinchillas wet. Chinchillas take dust baths for a reason and can’t dry adequately due to their dense fur.

Only allow them to cool down by moving to a colder room or using a damp cold cloth and poking their ears with it gently. Outside of these tasks, just sit back and keep an eye on your chinchilla.

Likely everything will be just fine, but it’s essential to learn from the issue and make the proper adjustments for the future of your chinchilla.

Remember, chinchillas can live up to 20 years so learning the best practices is certainly better to do now than learning these mistakes in the future. Don’t worry, it gets much easier, and I assure you that you won’t have any regrets with being a chinchilla parent. It’s awesome, to say the least.

Final Word, If Your Chinchillas Ears Are Red, Take Active Steps to Cool Them Down Quickly

Hopefully, this post didn’t scare you too much because that certainly wasn’t the intention. I was trying to be completely clear that your chinchillas’ ears turning red could be a very dangerous issue however, so it’s essential to take active steps to fix the situations.

Stay calm, cool the room down and check the temperature of the room and make the proper adjustments and everything will be just fine. This is one of the few scares chinchillas will likely give you so don’t hesitate to adopt one if you are still on the fence or debating it.

I’d love to hear your stories as well.

What’re your thoughts on the best practices of how to handle your chinchilla when you notice their ears have turned red? Any further recommendations that I didn’t lay out in this post? Be sure to share your stories and drop a comment below. As always, thanks for stopping by, I appreciate you.

Sometimes, understanding how to take care of a chinchilla can seem daunting when you are brand new to owning a new chin. I get it, and I have been there. Today, I want to touch on the topic of...

Thanks for Visiting Planet Chinchilla. My Name Is Josh and I have a 4-Year-Old Female Chinchilla named "Chili". Planet Chinchilla Was started to share our journey with all of you. I'm also the author of the Digital eBook "Avoiding Critical Mistakes Ultimate Chinchilla Care Guide, From Adoption and On" That you can see below or by visiting the E-Book Store.

Visit The Information Page For This Digital eBook Here