Did your chinchilla wink at you?

Was it a quick “nice to see” you wink, or a “mischievous little shared secret” wink?

I have some bad news for you. But also some good news.

The bad is that your chinchilla winking does not mean anything in terms of your relationship with each other.

The good is that a chinchilla winking is rarely something bad and generally means it likes you and feels comfortable around you.

But there can be many reasons for a chinchilla winking.

Keep reading to learn why chinchillas wink and what it means. We’ll also tell you how to proceed if it turns out the wink is a symptom of some health issue.

Why Do Chinchillas Wink?

Winking can be a sign of a happy chinchilla. So, if you notice your chinchilla winking, chances are it is happy to be around you. However, your chinchilla could also have something in its eye or even have an underlying health condition.

For that reason, we need to dive a bit deeper into the topic. In most instances, winking has no particular meaning and is not indicative of an eye problem. But sometimes, it could mean your pet has a issue you need to help with. Of course, a wink could also be a blink. 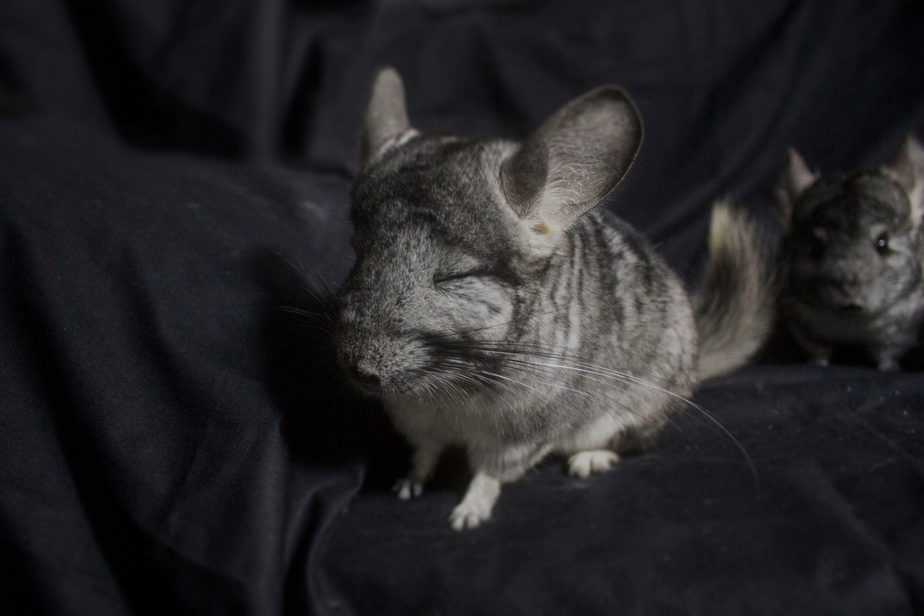 Chinchillas aren’t known to be regular blinkers. In fact, they only blink about twice every ten minutes. Rarely ever blinking gives chinchillas an upper hand in the wild, when it comes to spotting predators. Combined with great hearing, keeping their eyes open means they are unlikely to miss a potential threat approaching.

But they do need to blink occasionally. Just like humans, chinchillas need to blink to moisten their eyes, which helps protect the surface of the eye from dirt or other foreign objects.

Unlike humans, chinchillas don’t wink as a way of telling a joke or being cheeky. Instead, they might just blink with one eye, to keep the other open and alert for predators. Or your pet may have blinked with both eyes, but you missed the other eye.

Winking may be a sign that there is something wrong with your chinchilla’s eyes. It may have an underlying health condition. If this is the case, you should take your chin to your vet as soon as you can.

Conditions that can affect the eye include conjunctivitis, cataracts and lens luxation. If you notice that your chinchilla has been winking far more than usual ,and you also notice other symptoms around the eyes such as matted fur, discharge, redness, or swelling, then you should get your pet an appointment at the vet.

Chances are, it has an eye infection. To heal your chinchilla, your vet will most likely prescribe eye drops or antibiotics.

There could also be dust in your chinchilla’s eye and constant winking can be a sign that it is irritating your pet and it is trying to get it out.

If dust does manage to find its way into your chinchilla’s eye, then you can expect symptoms such as a watery eye, discharge, and your chinchilla pawing at it. If the issue doesn’t resolve itself, you may need to step in to remove any dirt, because it can lead to infections like conjunctivitis.

How Do You Know If Your Chinchilla Likes You?

If your pet comes up to you on its own, and doesn’t squirm when you hold it, congrats! It really likes you!

Another sure sign is when it regularly eats up all of its food and drink. Happy chinchillas are stress-free, which means they find it easy to eat all of their food.

Along with these signs, your chinchilla may also jump around a lot, showing that it is confident with you in its presence. It may even talk to you. Of course, not literally talking, but if you hear your chinchilla grunting, barking or squeaking then it means it likes you.

If you have a new chinchilla, you may want to follow these tips, so that your chinchilla can become used to you. It may take 2 to 4 weeks before it starts to like you and show affection, but if you treat it right, it will happen.

What Does It Mean When A Chinchilla Winks At You: Final Thoughts

A chinchilla winking at you can mean a number of things. But it does not mean the same as when a human winks at you. Most commonly, it just means you chin has something in its eye, or it is blinking.

As such, if you see your pet winking far more than usual, check to make sure it does not have something in its eye. You may want to contact your vet, too. But in general, a wink is nothing to worry about and is just one of the ways you can tell your pet feels comfortable around you.