If you are considering adopting a chinchilla, it’s perfectly normal to ask the question “are chinchillas social”?

Clearly, we want to adopt a chinchilla that’s friendly and enjoys interacting.

This post is designed to answer that specific question and based on my experience owning a chinchilla for the past 5 years.

Here is what I intend to cover in today’s brief post:

Are Chinchillas Social and What You Can Expect

Like we stated above, chinchillas are incredibly social animals. 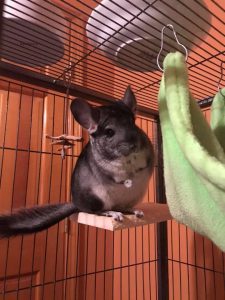 My chinchilla is typically waiting to greet me at the front of her cage when I walk in the room.

This gives me a clear indicator that she is ready to come out and play.

This is also partly because I always let her out of her cage at the same time each day.

Nonetheless, it’s imperative that you understand your chinchillas’ common behaviors and temperament.

Sometimes it completely depends on the socialization a chinchilla has already been exposed to before the adoption.

The only way to distinguish this quickly is to pay attention and be able to recognize when something may be wrong with your chinchilla.

We will cover that specific topic next.

Some chinchilla owners or individuals who just adopted a chinchilla may not realize this about chinchillas.

The fact of the matter is simple.

Chinchillas form bonds with other chinchillas or cage mates as well as their owners.

A more straightforward way to word this would be to say that chinchillas are affectionate pets.

Chinchillas also enjoy being in pairs in some situations.

This doesn’t always mean that chinchillas do better in pairs but for the most part, chinchillas another chinchilla around.

At a very minimum, they at least prefer the owner to interact with them.

This often leads the new chinchilla owners to ask how often you are supposed to play with a chinchilla.

The best answer to this question is daily.

However, chinchillas are not hard to take care of, and playtime doesn’t require much from you.

Allow your chinchilla out of the cage once a day if possible.

Clearly, it’s best to interact and play with your chinchilla during this time.

If the room is chinchilla proofed of course.

Following these simple steps can help keep your chinchilla out of depression.

Chinchillas do get lonely.

These items we just discussed is your chance to make sure you avoid this.

Don’t worry; it sounds more overwhelming than it really is.

Consider a Pair of Chinchillas If Necessary, To Increase Social Activity

An easy fix to a chinchilla needing more social activity is simply to adopt a second chinchilla.

If you follow other posts I write, you will know that I always encourage this if you can do so.

If you have a large enough cage or the time and the budget to accommodate, go for it.

Sure, your chinchilla cost may rise but overall, it’s the chance to keep two chinchillas socially happy and entertained.

Just ensure that you follow the correct bonding procedures to avoid other issues.

This is one quick way to make sure your chinchilla always has a cage mate, social interaction a companion throughout life.

That’s my advice at least and I’m sticking to it.

A Few Other Words of Advice About A Chinchillas Social Behavior

At this point in the post, I think we got the message that chinchillas are very social creatures.

Another tip I have for you is not to get overwhelmed by needing to interact daily with your chinchilla.

A lot of individuals I see in forums tend to think it’s too demanding.

It tends to have people believing that chinchillas do not make good pets.

The opposite is true.

It’s okay if you miss a day from time to time and it’s understandable if life gets in the way.

It happens to me all the time, and I’ve never noticed any odd behavior from my chinchilla because of it.

If you get your chinchilla out to roam around a safe room when you can, everything turns out great.

The best advice is to try and build this into your calendar right out of the gates.

I personally get my chinchilla out very early in the morning and let her run around while I wake up.

This works out great.

I get to catch my bearings and get my day started, and she’s has had her social interaction for the day.

In the evenings, If I have time, I may even get her out a second time to interact with my young 4-year-old son.

It really depends but I never beat myself up over the fact that sometimes things pop up and calendars can be demanding.

If you put in any reasonable amount of effort with a chinchilla and interacting your chinchilla will be happy and friendly.

Make Sure You Have A Large Chinchilla Cage

Due to chinchillas being so social and enjoying a second chinchilla as a cage mate, I have the last recommendation for you.

Always make sure you have a large enough cage.

This makes sure that you have plenty of items for your chinchilla to play with.

It also gives your chinchilla the ability to jump around in the cage to stay mentally stimulated and burn off energy.

This helps dramatically in situations where you can’t always get back around to getting your chinchilla out of the cage to play with.

You are primarily using a large chinchilla cage to keep your chinchilla stimulated and comfortable.

It’s also just the recommended path to take in general.

Find one of the best chinchilla cages.

Also, follow the minimum guidelines on how large a chinchilla cage should be.

The rest will take care of itself.

They need interaction and love from other chinchillas or the owner.

Ensure you make time to interact and play with your chinchilla as much as possible.

If you do this, you have nothing to worry about, and your bond will grow over the next 1-2 decades.

We are turning the floor over to you.

Chili and I wish you the best of luck with your chinchilla and the journey you have ahead of you.

How Social Has Your Chinchilla Been So Far?

This is where I encourage my readers to chime in on the topic.

How social do you think chinchillas are?

What’s the best approach to interacting with your chinchilla daily?