Chinchilla’s are known to be quite the chewers and understanding if they can have certain items to chew such as cardboard can help eliminate any potential issues and health hazards.

Especially in the beginning for all of the new chinchilla owners reading.

I have been raising a chinchilla for the past 5 years and here is what I can tell you on this subject.

Clearly based on the statement above, chinchillas shouldn’t eat cardboard.

You may be curious why this would become an issue and why it may be a common mistake that chinchilla’s owners make.

Here is what I want to cover in today’s brief 2-minute post: 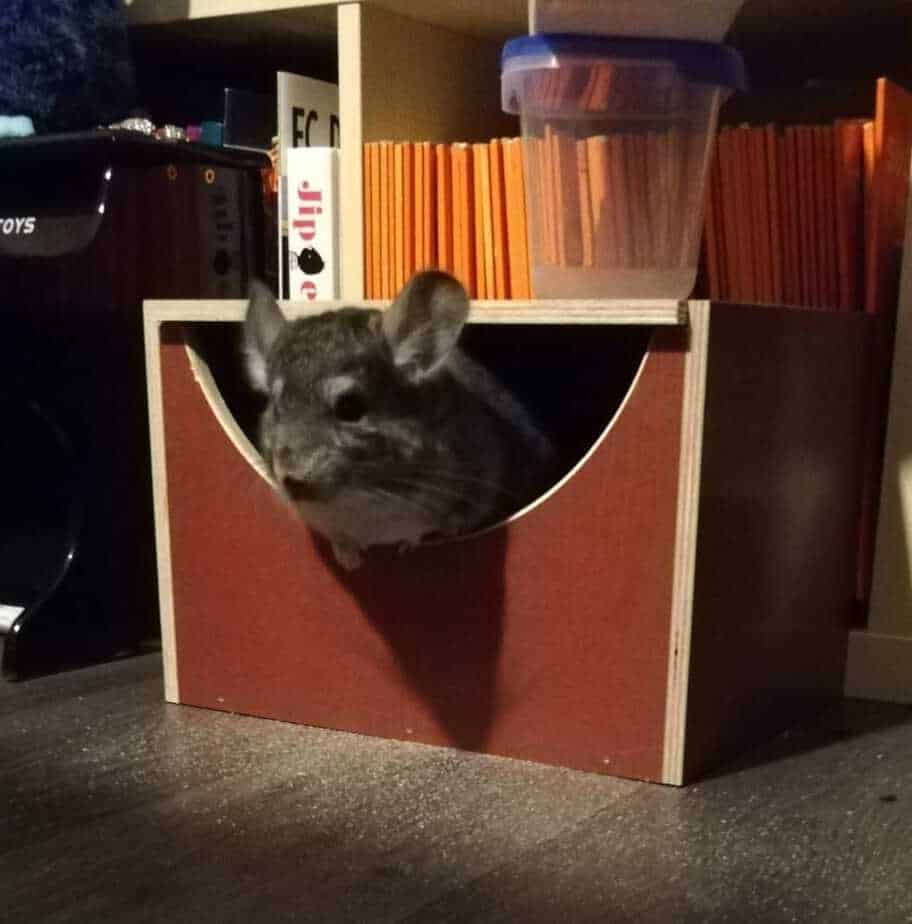 Cardboard can certainly be incorporated into playtime with some supervision and yes, chinchilla’s do like to play with several different kinds of cardboard.

This can include items such as small boxes and toilet paper rolls.

They love to jump in and out of boxes and even remove fun treats from a toilet paper roll.

This can include things such as the following:

All three of these things would make a great activity to allow your chinchilla to work for and get out of a toilet paper roll.

Here is the deal though, you shouldn’t be allowing your chinchilla to consume or actually ingest the cardboard.

Simply meaning, no chinchilla’s should not be eating cardboard.

I get it, you want to spice up the playtime and the time you have your chinchilla out of the cage.

The more time you spend making activities for them to interact with you outside of the cage, the more they will begin to bond and recognize you.

Additionally, sometimes we pull our chinchillas out for dust baths and other activities.

The downfall we run into frequently is looking for clever ways to allow our chinchillas to have more fun when they come out for playtime.

Other Options For Cardboard Use When Out For Playtime With Chinchillas

Many chinchilla owners often will take cardboard boxes and cut holes in it to create a hiding box type maze for your chinchilla to jump in and out of, shred, and ultimately have a great time.

Considering how much chinchillas love their nest box, you can certainly bet they will love this activity and item you have created as well.

Again, just do not allow your chinchilla to actually eat the cardboard.

When you run into a problem is when your chinchilla isn’t a fan of spitting out the small amounts of cardboard.

Other issues can present with cardboard as well if you begin using unsafe cardboard with dyes, staples, or other inks that can be toxic if ingested (more on this shortly)

Cardboard consumption could also cause other illnesses with your chinchilla.

This can include digestive blockages.

This could also include other issues such as diarrhea.

Can Chinchilla’s Chew Cardboard If It Is Not Consumed?

Here’s when it gets complicated.

Your chinchilla will love cardboard.

Cardboard is just a darn good play item for a chinchilla.

Some owners are risk-takers and have no fear of placing cardboard in the cage, and many chinchilla owners use items such as Kleenex boxes and toilet paper rolls for playtime.

Again, don’t get me wrong, in most circumstances, this is going to be perfectly fine although I do advise against placing the cardboard in the cage.

This could turn dangerous for a new chinchilla owner or without proper supervision.

Some owners in this situation will start to feel bad.

I’d argue that if you are in this boat, you need to spend a few extra dollars and get a large enough cage for your chinchilla.

Ensuring you provide one of the best chinchilla cages is always going to be a critical step when adopting a chinchilla.

Instead of using cardboard for your chinchilla, load up the cage with some of the best chinchilla toys that are known to be safe.

You can also be considering some of the best chinchilla accessories to the chinchilla cage.

To me, knowing my chinchilla is safe and not having to use cardboard unless I am supervising is a better approach.

This will effectively allow you to place other safe items and ledges for your chinchilla to climb and jump on.

You can read more about how big a chinchilla cage should be here.

Cardboard Can Be Safe But Always Excercise Caution

If you are like me and hate to take away something you know your chinchilla loves, just be sure to be safe about it and keep an eye on it.

Again, playing with the cardboard has absolutely zero risks to your chinchilla.

In addition, chewing the cardboard is also not very dangerous if they spit it out or they aren’t consuming an abundance of it at a time.

That’s where you can run into problems.

If you decide to use cardboard during playtime, cage time, or whatever the case may be, just monitor what your chinchilla does with it when given a chance.

Don’t leave your chinchilla to roam their cage freely with the cardboard.

Who knows what they do with it overnight or what they are doing when you’re not watching!

You can see more about what chinchillas do at night here.

Are they just shredding it and then spitting it out and rolling around and playing?

Are you noticing them digesting large pieces of cardboard?

If this is the case, cardboard time should be over for good because it’s not worth the risk.

On the flip side, I’m also mindful that cardboard has been the cause of death for chinchillas as well.

Ultimately, the choice is always yours.

A few last considerations you need to keep in mind when allowing your chinchilla around cardboard is the specific cardboard you are allowing them to be around.

Cardboard, depending on where it came from, will contain glue and other dyes.

These will be your boxes from department stores or still stamped with manufacturer labeling.

These should be avoided.

Although it’s possible your chinchilla never actually ingests the dangerous cardboard in this situation.

If they do happen to do so, you run the risk of them ingesting dangerous dyes, glues, and ink.

Use plain cardboard only and ensure it doesn’t contain these glues or dyes.

This ensures you are 1 step closer to providing safe cardboard to your chinchilla to play with at their leisure (with your supervision) of course.

You also need to double-check that the cardboard either being placed in the chinchilla cage or in the playtime area is free of staples.

Ingesting a staple on accident could result in a tragic ending for your chinchillas.

Again, to recap, if you are going to allow your chinchilla to play with or nibble on cardboard, make sure to double-check and be 100% sure that no staples are present in the cardboard.

Try Using a Pine Box Instead of Cardboard for Your Chinchilla

Pine is a safe alternative if you don’t feel 100% comfortable offering your chinchilla cardboard either in the cage or during playtime.

Trust me, I don’t blame you, and I will only do it every now and then and for very small amounts of time because I’m a little OCD and overprotective of my chin.

If you are handy at all, you can create your own pine bridge, hiding box or hanging toy for your chinchilla to chew on safely.

You won’t have the same concerns that you run into when the cardboard is part of the equation.

That’s again, just my two cents and the choice is yours.

You can also order these safe toys on any platform such as Amazon if you don’t quite have the handy skills to throw it together.

Just be sure not to use glue or other unsafe materials that could potentially cause your chinchilla harm.

Leaving your chinchilla alone for several days is one thing.

Leaving your chinchilla alone with cardboard is an entirely different story.

You shouldn’t ever leave your chinchilla for a weekend or more than overnight with cardboard in the cage.

When doing this, you have no way of knowing if they are ingesting large pieces, small pieces, or any pieces of cardboard at all.

Not to mention if choking or a digestion block did occur, and you’re not around for the weekend, that could spell trouble for other reasons such as not being around to seek help or treatment for your chinchilla before it’s too late.

Another big item that I like to make sure I point is that you should never trust the pet stores.

I don’t know how many times I have found or purchased toys for my chinchilla to come home and realize they contain ingredients terrible for chinchillas.

It is one of the reasons I even recommend adopting a chinchilla from a reputable chinchilla breeder near you.

Stores such as PetSmart or Petco are not educated enough on chinchillas and what is considered safe for a chinchilla.

Even worse than they were constructed out of un-safe materials for your chinchilla to bite, nibble shred or interact with in any form. 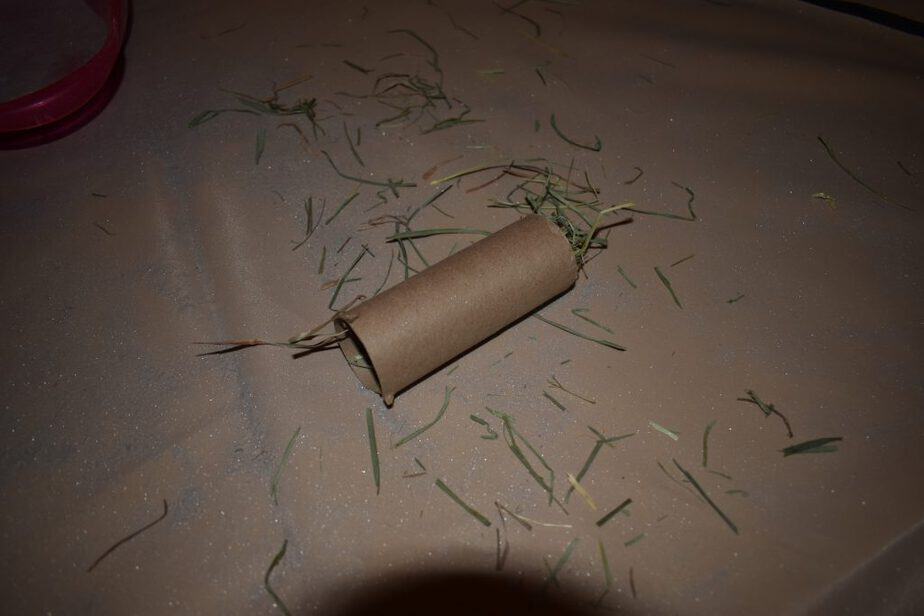 Another common question that comes up related to chinchilla’s eating, chewing, or playing with toilet paper rolls.

I would say if there were a great alternative or happy medium spot, it would be offering your chinchilla toilet paper rolls instead of other cardboard options.

You know for sure that staples won’t be involved.

You also know that no ink, dye, or glue will be present in harmful amounts.

Your chinchilla will love it and you will feel much more safe using this approach.

Is It Bad for Chinchillas to Eat Paper?

No, a chinchilla won’t be harmed from eating paper unless it contains dyes, inks, or other toxins.

Ingesting paper is not best for a chinchilla but consuming in a small amount will not cause your chinchilla any harm.

Paper towels do not contain anything toxic on them.

Likely your chinchilla will decide to shred and destroy the paper towels before eating them.

If they do eat paper towels, just be sure to keep an eye on the situation and not allow over-consumption.

If you are supervising it.

Chinchillas consuming or ingesting cardboard is an entirely different story, and you need to be careful when your chinchilla has free access to this.

Chinchillas are one of the best, most friendly loving pets we can adopt.

Let’s all make sure we take the steps to keep them safe and sound.

Chili and I wish you the best of luck with your new chinchillas and the journey you have ahead of you.

What Are Your Thoughts About A Chinchilla Eating Or Chewing Cardboard?

Do you agree with me or do you leave your chinchilla unsupervised to consume and play with as much cardboard as they choose?

What are your methods for allowing your chinchilla to interact, play with, and use cardboard?