If you recently adopted a chinchilla, I’d venture to say you have a long list of questions and one of them may be about a chinchilla chewing and if they chew in general.

I was the exact same way.

I’ve owned my female chinchilla for over 5 years now, and here is the insight I can provide you on this topic.

That’s the basic answer, and I’m also aware that chinchillas may chew on less desirable items or exhibit some other odd chewing behaviors.

Don’t worry, you have plenty of options. Some of these options are even part of the recommended diet for your chinchilla.

In this quick 3-minute post, I intend to explain and break down all these situations and questions for you.

Furthermore, to make your life as easy as possible, I have created easy to navigate links directly below that will allow you to skip to any specific section of this post that you desire to learn more about.

Here’s what is on the lesson plan for today’s post:

Again, if you need the information quickly or you are in a time crunch, use my links above to skip to that section of the post.

If, however, you have those 3 minutes to spare, I recommend you take a glance at the full post directly below.

Here’s what you need to be aware of when it comes to chewing with your chinchillas.

Do Chinchillas Chew and Why? 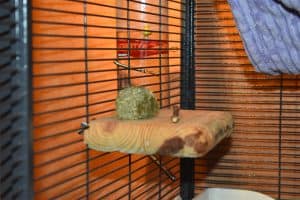 They need to chew, and it’s best for them to chew throughout their entire life.

Chewing helps a chinchilla to properly file down their teeth, which in return, helps keep your chinchilla in the best possible state of health.

Teeth are one of the most significant concerns and health issues that chinchillas can deal with throughout their lifespan.

Chewing is simply how they keep up with continually growing teeth and remain healthy.

How Do I Stop My Chinchilla from Chewing?

This is another question I see that arises frequently.

How do I stop my chinchilla from chewing?

You don’t stop a chinchilla from chewing.

Chinchillas need to be chewing.

Your job as the chinchilla parent is to ensure they have the correct items to chew, such as plenty of the correct chinchilla hay in addition to lava blocks, hay cubes, and other chinchilla toys specifically designed for chewing.

The only chewing behavior you must avoid with a chinchilla is chewing a human’s hand or chewing potentially dangerous items such as cords or wires.

Outside of that, you should be more worried if your chinchilla is not chewing because this typically indicates something is wrong with your chinchilla.

Yes, a chinchilla will chew furniture.

A chinchilla will chew nearly anything within reach.

It’s essential to always chinchilla proof a room where a chinchilla can be and ensure that all dangerous objects are not accessible.

Yes, a chinchilla could chew fleece, but it’s not as likely to be chewed by chinchillas as other items within the cage. Fleece is typically used for chinchillas as a bedding alternative.

It’s also one of the best chinchilla beddings as well.

Most chinchillas will not chew and destroy their own bedding.

That’s been my experience so far with owning my chinchilla.

Why Do Chinchillas Chew on Their Cage?

Chinchillas will chew on their cage to file their teeth down when other adequate chewing items are not present.

Overgrown teeth in chinchillas can cause pain, illness, and infection.

A chinchilla naturally understands that they need to chew to file their teeth down to avoid these growing pains.

Without the proper items inside of the cage, your chinchilla may turn to chew on the cage itself instead as a last resort.

So, we now know what chinchillas will chew and some of the hazards you can expect.

We know what chinchillas should not be chewing, but what’re the best items to provide your chinchilla to allow them to chew in a healthy and safe fashion?

What can chinchillas chew on?

Luckily, I’ve provided some tips and recommendations below that you can implement to promote healthy and safe chewing for your chinchilla without having your chinchilla cause any damage to your home or their own cage.

Below is a list of what chinchillas can chew.

Other items are okay for your chinchilla to chew as well, and there are several variations of these safe chinchilla’s chew toys you can choose.

However, for the sake of keeping this post sweet and to the point, I only included the most popular options above and the items that I purchase for my chinchilla with the most frequency.

Overall, my chinchilla chewing has not been an overly difficult challenge or something that’s caused me any issues.

I use wire protectors on the cords my chinchilla could get access too.

I keep an eye on her when she is out for playtime, and for the most part, I never have any issues.

Exercise some common sense and be sure no dangerous items are around, and you will be in good shape.

Chinchillas Will Always Be Known To Chew

Chinchillas should be chewing; they do chew, and you should never try and end this behavior.

It’s essential for their health and well-being and will continue for the next 15 years or for however long your chinchilla lives.

It’s just what they do.

Keep a good stock of good/safe chinchilla chew items on hand, and you likely will never have anything to worry about.

How Often Do Chinchillas Chew

As always, I love to encourage feedback from the readers.

What issues have you run into when it comes to chinchilla chewing?

Do you have any other safe chew toy recommendations you can share with the readers?

As always, Chili and I appreciate you stopping by.

We will catch you next time.