So it makes sense to wonder if chinchillas are capable of feeling emotions.

Even many chinchilla owners are not sure.

The first thing to understand is that no chinchilla will show you the kind of emotion you get from a dog.

That’s just not going to happen.

But it does not mean they don’t have any feelings at all.

Keep reading to learn if chinchillas have emotions and how you can recognize any emotions they may have. This is more important that n you might think.,

Do Chinchillas Have Emotions?

Yes, chinchillas have emotions. They can indicate to us when they feel happy, frustrated, or scared. They may even get depressed with improper care or lack of social activity.

And that’s exactly what we will cover below: how to recognize your pet’s emotional state.

But first I want to touch on the last bit above: the part about chinchillas sometimes feeling depressed.

Chinchillas love social attention. Without it, they can begin to go a bit stir crazy and even become depressed. This is an extremely important topic.

You can read about chinchilla depression here. It’s vital as chinchilla owner that you understand that they can feel depressed and know what to do about it.

It is also important to recognize any other emotions they may feel, which brings us back to the topic at hand.

Not only can recognizing their emotions lead to a better relationship with your chinchilla, but it can also helps ensure you keep your chinchilla in optimal health, not only physically but also mentally.

Now let’s cover how your chinchilla might give you clues as to how it is feeling, for example if it is upset or pleased with something that you are doing.

Directly below, I’m going to demonstrate 5 ways chinchillas can display emotions and feelings toward you or even toward their environment.

Keep in mind, these are from personal experience and things I’ve noticed with my chinchilla. Other chinchillas may behave slightly differently depending on how they have been raised etc.

Nonetheless, I’m confident that if this is how my chin displays her emotions, that someone reading is likely to notice the same behaviors.

#1: Displeasure And The Cold Shoulder

If this isn’t a chinchilla showing emotion, I don’t know what is.

My chinchilla tends to be much more displeased with me on days when I didn’t have the time to get her out of the cage for playtime.

She doesn’t greet me in the same fashion, and she surely doesn’t have the same spring in her step.

Make sure you are affording your chinchilla this time as often as possible.

In case you miss a day or two from time to time, ensure you have your chinchilla’s cage set up correctly with some of the best toys and accessories to keep its little mind occupied.

I have an article covering how often to play with a chinchilla. I also have one with a rundown of the best chinchilla accessories.

#2: Greeting Me Front and Center Each Morning

This didn’t happen in the beginning. It takes time for a chinchilla to adapt to its environment and build a bond with its owner.

Some owners have reported that it can even take years. But that’s unusual.

For me she knows I’m coming down the stairs to interact with her in the mornings, and she has her front two paws on the front of the cage greeting me with enthusiasm every day.

If it wasn’t for the days at the beginning where this didn’t happen, I wouldn’t think much of it.

However, since I know she was more scared in the beginning shortly after adoption, I’m 100% confident that this is my chinchilla showing that she is happy to see me.

When we have company over for the holidays or just in general, we need to use the room where my chinchilla is kept as a spare bedroom.

It’s incredible how quickly she recognizes that these individuals are not me, and she can almost get into a scared and timid state.

Most of the time, she will just retreat towards her nesting box. She may hide in her hammock or even one of her tunnels as well.

Her fear of strangers and the way she responds to them invading her room definitely seems like an emotion taking place.

#4: Climbing, Jumping And Enthusiasm When Out Of The Cage

This should be one of the feelings all of you will experience right out of the gates after adopting a chinchilla.

Most chinchillas get excited to exit the cage and interact with their owners.

Sometimes, in the beginning, this may not be as apparent. They won’t show it as much until they have built more trust with you.

With time, they begin understanding the time of the day and how you act right before it’s time to come out and play.

This is typically when my chinchilla is at her happiest state.

These are the kinds of emotions we want to see each day being a chinchilla parent. 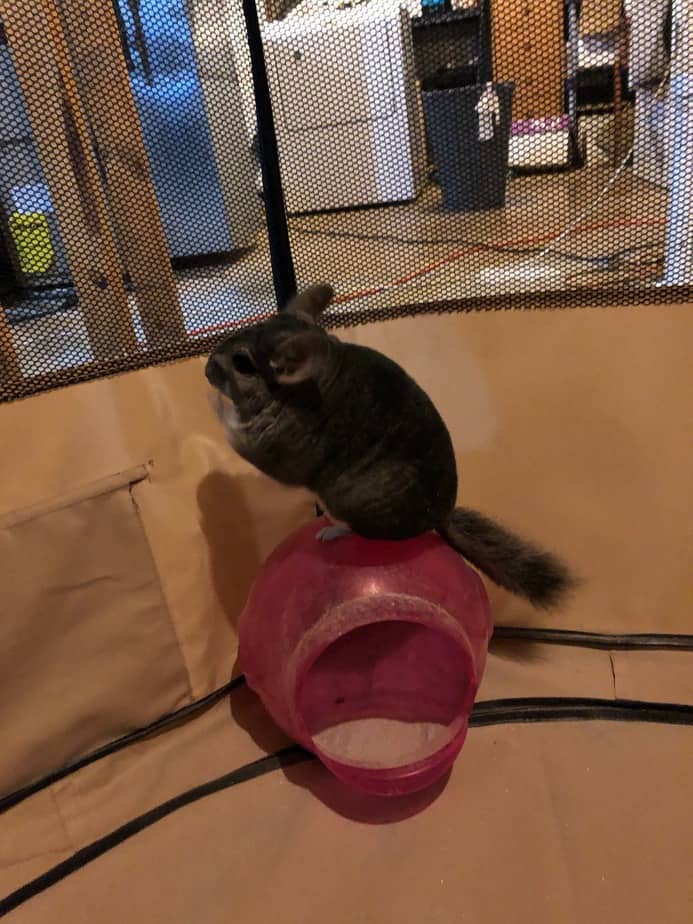 Sorry for making you feel like you were the one thing that brings the most happiness to your chinchilla.

But seriously, chinchillas display an incredible amount of excitement for their dust baths. Most chinchillas absolutely love dust bath time.

It’s likely because they only get 3 or so per week in most households.

Well, they do too. Far more than us, it seems. You will quickly recognize this early on with your chinchilla.

But it’s not just about fun. Dust baths are an important part of ensuring you provide proper care and keeping up with your pet’s hygiene needs.

Be sure to always afford them the opportunity to use their dust bath several times a week and enjoy your happy chinchilla!

Well, there you have it, those are 5 surefire ways to know your chinchilla is displaying emotion towards you.

Now, let’s cover a couple of questions that tend to arise, before sending you on your way.

The following questions are ones I get fairly often, or that I have seen asked a lot in forums or FB groups.

Yes, chinchillas can cry. Chinchillas make an audible crying noise when they are in pain or discomfort. A chinchilla may also cry when it does not want to be held.

Chinchillas are known to make several different noises to express emotion or displeasure. Crying just happens to be one of those verbal communications of which a chinchilla is capable.

Sometimes a chinchilla will cry or make one of these audible noises to inform you that it doesn’t want to be picked up.

If your chinchilla typically does not cry and you suddenly notice it making this noise, it may be wise to consult a vet to see what the issue might be.

It can be tough to distinguish all the noises chinchillas can make and what they mean. I recommend beginning with my post about several different chinchilla noises.

Can A Chinchilla Be An Emotional Support Animal?

While chinchillas may be an emotional and affectionate pet to own, they likely won’t be the best emotional support animal, purely because they don’t always like being held.

This does not mean that they can’t be an emotional support animal.

If you wound up here because you were curious if chinchillas can be emotional or show emotions, then I hope I answered all your questions.

Chinchillas are friendly companions and make for great additions to any family. They have emotions just like any other pet.

Treat them with the respect and love you would show any other family pet and watch the relationship flourish.

Chili and I wish you the best of luck with your chinchilla endeavors.

Does your chinchilla show emotion?

What does your chinchilla do to demonstrate happiness or frustration?

As always, Chili and I appreciate you stopping by. Thanks again, and we will see you next time.