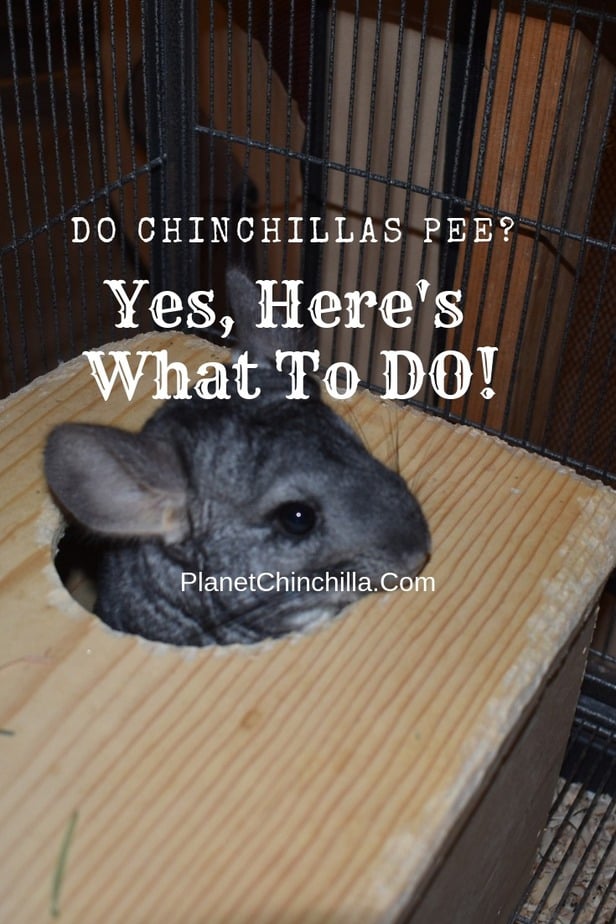 Sometimes when we are considering what animal to adopt or have a pet in mind, we have a lot of curiosity about several different topics.

That’s completely understandable, and I was the exact same way.

When I planned on adopting my chinchilla, I was on google hours at a time googling various topics on how to care for chinchillas and just what to expect in general.

One of the questions that popped up during the process was one of the less desirable traits about all pets.

Well, I knew the answer already but wanted a more in-depth explanation of what to expect, and now I plan on delivering you the exact same thing.

Although being sprayed by chinchilla urine isn’t a common occurrence, it’s still something to watch out for.

In addition, there are some other fun facts that you should know, so you are 100% totally prepared to be a new ethical and responsible chinchilla owner.

I’m going to deliver the information and goodies that encompass everything you need to know about chinchilla pee and urination!

Additionally, I’ll give you tips on how to prevent your chinchilla from smelling too help keep their hygiene at top-notch quality.

Are you getting excited yet? Good, me too.

More on Chinchilla Urination and What to Expect.

I’m not honestly sure why people would be curious if this animal needs to urinate.

They consume fluids including water out of a bottle attached to their cage just like any other animal in the rodent family.

They pee where most other rodents pee when kept in captivity as household pets.

On their fresh shavings or bedding within their cage.

Your chinchilla isn’t going to just pee freely all over everything in the cage or be running around peeing all over the house and anywhere they get a chance to spray some urine.

The nice shelves that are in the cage for your chinchilla are not going to be soaked in urine, and she or he is not going to urinate much of anywhere except on the bedding at the bottom of the cage.

This surely makes the cleanup process much easier and plenty of steps can be taken to ensure your chinchilla remains completely odor free and smelling good!

It’s easy to clean up. It really doesn’t smell as bad as some other rodents would make a cage smell over time and cleaning the cage is extremely easy.

In fact, I have a video about cleaning a chinchilla cage that you can see here.

The video above shows you how I thoroughly clean the cage in roughly 10 minutes, and this is a full blown-cage cleaning.

Will Chinchillas Pee in Other Places?

Technically yes. I have a female chinchilla that is currently 1 year old.

If you have seen any of my YouTube Videos that are posted on the main page of this site, you know when I need to interact with my chinchilla in a non-safe or non-chinchilla proofed room.

I use a tent like a playpen enclosure to make sure she is always safe when playing.

After a lot of excitement or playing with my 2-year-old son, she will squat in a corner and dribble out some urine, but it’s always a minimal amount.

I never really notice much of an odor or smell coming from the pee, and she doesn’t do it often, but she has undoubtedly done it before.

The poop doesn’t smell either although they do poop non-stop.

I think we have kind of answered this already, but the answer is yes.

It’s possible that your chinchilla pees anywhere you interact with them.

This could be in the cage, in a designated play area and yes, it’s 100% possible that a female chinchilla decides to spray you although this is rare and won’t occur often.

That brings me to my next point since I’m one of the fortunate individuals who currently own a 1-year old female chinchilla.

Her name is “Chili” in case anyone here was curious. The image on this post is her playing peek-a-boo out of her hiding box inside of her cage.

Chinchillas are a household pet that hasn’t always had it easy in life.

They have been the victim of hunters among mountainsides.

They have grown to run in packs, and they don’t forget negative experiences as quickly as you may think.

This is when it becomes essential to choose a chinchilla from a reputable rescue that has been socialized well and has a strong chance of being a loving, friendly chinchilla towards you and the other family members.

I lucked out big time with this and got a female that needed very little time to adjust and will love, cuddle and interact with me, my wife and my 2-year-old son.

However, not everyone gets this lucky. Especially for individuals who have purchased a non-socialized chinchilla from a pet store.

If this is the case, your chinchilla has natural defense moves that they use to either fight off predators or merely to let you know that it’s time to back off.

For females, this may come in the form of your chinchilla spraying urine and it’s possible a chinchilla may even bite.

I haven’t personally had this happen and will share a quick story with you at how much she is willing to put up with.

My two-year-old son will handle her a little rougher (not dangerously) but sometimes have quick movements towards her, loud laughter and is just overall a little more intimidating for my chinchilla.

However, she has never sprayed any of us with urine.

She hasn’t even urinated anywhere near us except in a play area sometimes she will make a squatting motion and drop a small amount of urine in a corner away from us.

Yes, chinchillas are smart and don’t pee right where they plan to interact, play or in, on or around shelves or other cage housing items.

At least I’ve never seen it thus far into owning one and don’t think it’s going to be a problem in the future either.

This is one of the only ways you’re ever going to pick up on an odor emitting from your chinchilla.

The pee itself does not have a strong odor.

If you aren’t diligent with cleaning the cage as often as you should, you may notice smells coming from the bedding area of the cage that has been soaked with urine over time. 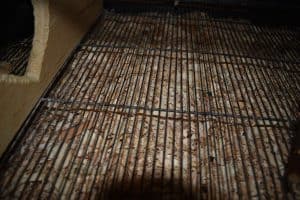 Do a little bit of extra work, and this won’t be an issue.

I make sure to a quick sweep and clean of my chinchilla cage every single day.

I shop-vac all poop pellets, check her water and bedding, refill her food and hay if need be and give the cage a good wipe down.

Every third day or so, I swap out the bedding.

Therefore, I can say with 100% confidence that chinchilla pee is nothing to fret over.

If you keep up with the cleanings and ensure that your chinchilla’s housing is changed and kept up as often as it should be, you won’t have anything to worry about.

You also will have no smell due to urine will be emitted into your home or the room where your chinchilla is currently housed.

The image above is my chinchilla’s cage.

This is what clean non-urine soaked bedding will look like.

Urine soaked bedding will typically be dark shavings that look wet and after too much time has passed, can emit an odor.

Keeping it clean often will take care of this issue for you.

How Do I Stop My Chinchilla Cage from Smelling?

We basically already covered this question in depth, but I will hit it on it one more time. So, how do I keep my chinchilla cage from smelling?

This will remove the odor from the cage.

Putting it All Together. Chinchillas Do Pee But It’s Nothing to Worry About!

At the end of the day, yes, your chinchilla will pee like any other small rodent animal.

However, chinchillas are unique in the fact that they are careful where they place their urine (unless your being sprayed) and they are odor-less animals in this fashion if you just take the time to complete a few everyday cleaning tasks and remain an ethical pet owner.

In all honesty, chinchillas will probably never spray you once they recognize you as the owner and the bond and love grows, but I’m sure it does happen for other chinchilla owners so don’t take that statement to the bank!

What’s your experience with chinchillas in this fashion?

Have you ever been sprayed by a female chinchilla with urine? Be sure to share your comments and stories below.

See you next time.

My Name is Josh and this is my 1 year old female chinchilla "Chili". We created Planet Chinchilla to share all the stories about owning a chinchilla that you need to know.

Chinchillas are the silent pet that’s much more popular than you think. Let me explain. If you had 10 friends, you were speaking to and informed them you are contemplating adopting a chinchilla,...

Continue Reading
link to Are Chinchillas Good with Cats?[Critical Things to Know]

If you already own a cat or a chinchilla and are considering getting the other pet in the near future, it’s natural to wonder how this may play out for you. It’s completely understandable for...