Have you ever noticed a stench like the worst-smelling fart of your life?

You look around for the source and see your son holding his nose and pointing at your chinchilla cage?

He’s lying. Your son did it.

Do you know how I know?

Because a healthy and clean chinchilla does not emit an odor.

Keep reading to learn what issues can cause a chinchilla to emit an odor and what you need to do to prevent that from happening.

Let’s begin by restating the answer to this question.

No, chinchillas do not smell. And their cages also stay odor-free, if you keep up with changing the bedding. If a chinchilla is emitting an odor or producing a smell, it is likely due to illness.

In most circumstances, when it comes to cage cleaning and your chinchilla producing any odor, it is due to the ammonia smell being produced by the urine.

It’s awesome to be quite honest.

It is important to understand that if a chinchilla does happen to smell, that you often have more of a serious issue to address.

Let’s start by diving into the causes of a chinchilla smelling and then touch on the cage cleaning process briefly.

How Dental Issues Can Make A Chinchilla Stink

A chinchilla is a lot like a human when it comes to the mouth and teeth. Except a chinchilla’s teeth continue to grow throughout his or her life.

If the teeth experience problems during growth such as overgrowth, crooked teeth, or they begin to wear unevenly, it can lead to pain. It can also lead to other issues like odor.

In other words, issues with the teeth can begin to cause problems in the mouth. And that can eventually cause an odor.

An easy way to recognize this early is if you notice your pet excessively grinding its teeth more than usual.

Over time, the teeth will grow into the soft tissue of the mouth which is when the pain, infections, and smell may begin to present itself.

It’s important to consult a vet if you notice anything that could indicate dental issues with your chinchilla. And again, you can often notice these issues, if your chinchilla is producing a smell.

Other symptoms could include the following:

The best way to avoid this issue is to always have plenty of chinchilla-safe chew toys available.

You should also keep your chinchilla on a healthy and balanced diet.

This includes using the best hay for chinchillas.

Ensuring that the teeth are healthy will eliminate the chance of this ever being the cause of a smell coming from your chinchilla.

Clean The Cage To Minimize Odors

So, we know that chinchillas do not smell and if they do, it’s either you not staying diligent with cleanings or a potential illness or tooth infection.

Since we already touched on the illness side of things, let’s discuss cleaning the cage, to ensure this cause of a stinky chinchilla is removed from the realm of possibilities.

You need to clean the cage often and ensure you clean the entire cage. Don’t just discard the chinchilla poop and call it a day.

Removing the poop won’t to anything to eliminate any odor that might be coming from the cage. Chinchillas poop doesn’t smell, so removing it won’t help in that regard.

Of course you should still remove it, and do so once or twice daily. They poop A LOT..

You need to also change the bedding in the cage. Even better, go with fleece liners as the bedding, instead of aspen shavings or some other disposable bedding.

Fleece make clean up so much easier and they are 100% safe. Not to mention, your chinchilla will love them.

This was a game-changer for eliminating all smells in my chinchilla cage.

This is because you can simply use a shop vacuum to clean the cage and all the normal debris such as poop, discarded hay, or chinchilla pellets.

Then, simply remove the fleece liners and wash them in cold water. Once this is complete, all urine-related smells or other odors will be completely eliminated.

Yes, chinchilla pee will cause an odor if it is not cleaned often enough. But it doesn’t stink when first excreted. Only if you let it sit for a while.

A cage that has urine either on aspen shavings or other chinchilla bedding will begin to smell like ammonia. It will smell just like any other dirty rodent cage like a hamster, rabbit, or even ferret cage.

It’s not a smell I enjoy, so I avoid this by ensuring chinchilla urine doesn’t go unattended in the cage.

I also have a post breaking down the best chinchilla litter.

Both of these will have you moving in the right direction to removing any chance of having a stinky chinchilla, if you have patience and do it correctly.

I have to clean my chinchilla cage with a full deep clean about every 4 days to prevent any form of smell from being produced, even with a relatively potty trained chinchilla (no, she is not yet fully trained on her litter pan but she is getting there).

Chinchillas may shed, let their water bottles drip on the bedding and fleece and their food and hay can also start to have a slight odor after enough days have passed.

Stay diligent and keep the cage clean and you likely won’t ever have any issues with your chinchilla smelling.

How Often You Should Remove Chinchilla Poop 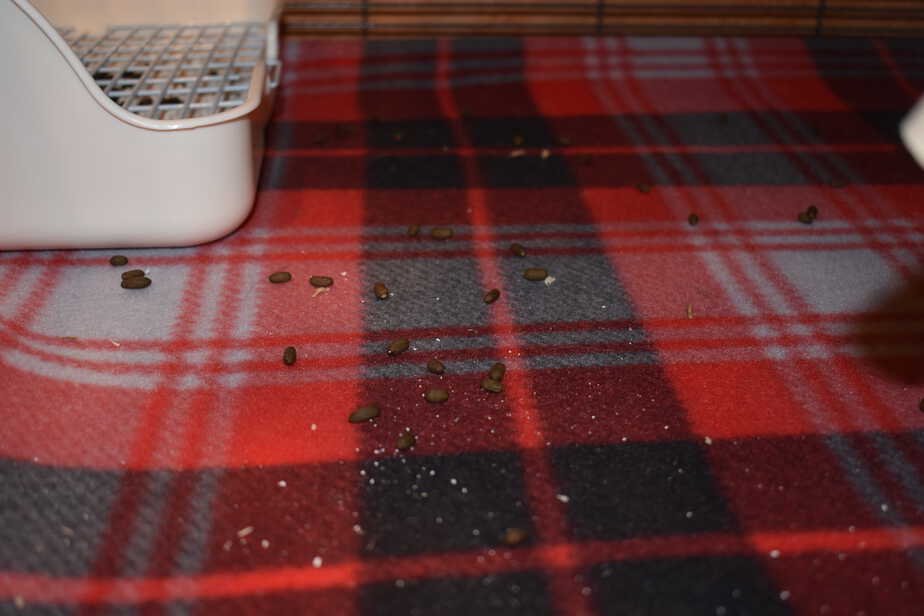 As far as the poop, I do it strictly to keep my chinchilla comfortable and happy and I do this about once per day.

Chinchilla poop will not cause your chinchilla or the chinchilla cage to stink any more or any less, just for the record.

You clean this simply because it’s gross to leave it in the cage, especially around the area where your chinchilla eats. That’s my 2 cents on the topic at least.

It depends on how much I see on the shelves, hiding boxes, and other items within my chinchilla cage.

Again, always play it safe and be sure the chinchilla itself isn’t omitting a bad smell just to ensure a vet visit isn’t needed.

To keep poop from falling out of the cage, you can also consider poop-scatter guards that are designed for certain chinchilla cages.

You can see these scatter guards for yourself here (Link to Amazon).

I’ve noticed that ever since I switched from a small wire bottom chinchilla cage to a large 2 level cage with fleece liners, the cage seems to remain cleaner and rarely smells.

Part of this is, of course, because my chinchilla is now relatively potty trained. But even if she wasn’t, it helps to give your chinchilla more space.

Assuming your chinchilla is not potty trained and urinates on the cage bedding, the more fresh cage bedding you have for the urine to get absorbed by, the less smell or stink that will be produced.

Chinchillas often find corners to pee in and when they do this repeatedly in the same spot with less bedding, the ammonia smell seems to be produced much faster from the cage itself.

Not to mention, large cages are simply more ethical for chinchillas. Chinchillas need plenty of room to move freely so they can climb and jump. Among other silly chinchilla-type behaviors of course.

The cage that I use to encourage and allow my chinchilla plenty of space is the Critter Nation 2 (dual-level) cage. I have a full review of the critter nation cage if you want to learn more about it.

Dust Baths Are Imperative To Keep Your Chinchilla Smelling Fresh 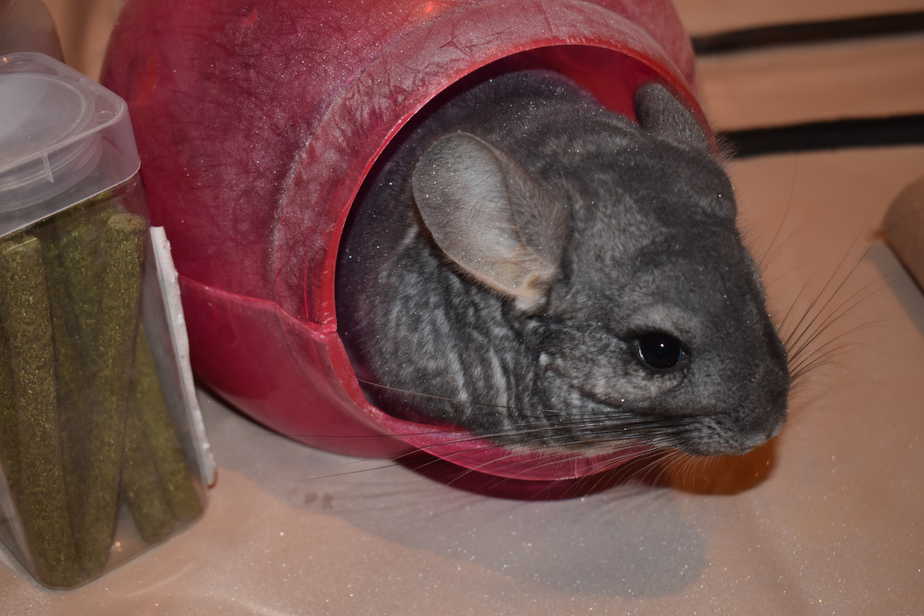 Regardless of the dust baths, and assuming the cage is clean and no illnesses are present, your chinchilla still will not smell.

We know that by now. However, they do still need to take care of that soft fur. Getting a chinchilla wet will not benefit you nor the chinchilla.

In fact, it can only make matters worse. The fur is much too thick and dense for water.

Dust baths are how to get the job done correctly. You can find this dust and the dust bath houses at any local pet store, or on Amazon.

My post about the best chinchilla dust and dust bathhouses will help you find the best dust and the best bath houses for your pet.

You should ensure that you allow your chinchilla a dust bath as often as possible. 3 times a week is good.

Giving your chinchilla the opportunity ability to bathe in dust regularly can prevent fur issues or other illnesses, and also help eliminate any chance of your pet producing a smell.

Yes, a chinchilla can, and will, throw poop. A chinchilla does not throw poop at its owners. They are most known for discarding their poop by throwing it out of the cage onto the floor around the cage.

Ensure you keep a regular cage cleaning schedule to avoid too much poop being present for your chinchilla to throw.

You can also refer to my link for the poop scatter guards I mentioned previously in this post to control this issue.

Chinchillas Do Not Smell: Final Thoughts

Your chinchillas should never smell bad or be producing any odor. If it does smell, that indicates a problem.

It could be an illness or other issue, or simply neglect on your part. You need to clean the cage regularly and ensure you keep the bedding fresh.

If you are keeping the cage clean and still notice an odor, you are probably dealing with some type of illness. Your best bet is to call a vet.

Chinchillas are great pets to own and do nothing but show affection towards their owners so be sure to take care of them properly in return. 🙂

Have you experienced your chinchilla having a bad smell before? What was the cause and what did you do to fix the smell?

Thanks for reading. Chili and I appreciate you stopping by and we will see you next time.