That makes them susceptible to injuries.

And because of their tiny feet, it can sometimes be difficult to detect until it progresses to a more serious problem.

Unless you know what to look for.

Keep reading to learn how to detect chinchilla bumblefoot, how to treat it, and how to prevent it from reoccurring (or occurring in the first place).

Can Chinchillas Get Bumblefoot?

Yes, chinchillas can get bumblefoot. It is a condition that typically causes a dry, slightly or severely cracked, inflamed and possibly bleeding footpad.

More specifically, it is an infection or inflammation that occurs on the footpad of your chinchilla and within the connective tissue of the foot. In many cases, a callous will form and grow on the bottom of the feet.

The callous can crack and become further infected. It can ultimately penetrate deeply into the foot tissue and even further into the tendons and bones.

It is imperative to treat this condition as soon as possible.

Not doing so can result in further illness for your chinchilla, extreme pain and discomfort, and potentially even death due to the bacterial infections that can develop.

We’ll tell you exactly how to treat the issue below.

But first, it’s important to understand how bumblefoot in chinchillas happens in the first place, so you can prevent future recurrences.

Unfortunately, it is not entirely clear what causes bumblefoot in chinchillas. There are a few possible causes, so it pays to take steps to address all of them.

It is also better to use fleece liners as your chinchilla bedding, as opposed to aspen shavings.

They provide a softer surface and much more comfort. They basically cause less pressure and pain for your chinchilla in the long run.

Fleece liners cost more than standard bedding when you first buy them, but since you won’t have to replace them, you save a lot of money in the long run.

You can check out the exact fleece liners I’ve been using for two years here.

Those are specially designed for the Critter Nation 2 Dual Level cages (the best chinchilla cages in my opinion), but they are available for other cages as well.

You can read more about the best bedding options for chinchillas here.

We will also discuss fleece liners and other preventative measures to take a bit more further down in this post.

For now, let’s move on and cover how to spot bumblefoot, so that you can act quickly when the problem arises.

To notice bumblefoot in the early stages, your best course of action is to simply check your chinchilla’s paws and feet from time to time.

Check for dry skin, abrasions, bleeding and any callouses.

In the beginning, bumblefoot won’t be as severe yet, so it might be more difficult to notice without physically checking and inspecting.

Other indicators may notice, especially as the condition advances, could be blood or physical signs of bleeding on your chinchilla itself or inside of its cage.

If like me, you have a standard grey chinchilla and red fleece liners, bleeding can be a bit more difficult to notice.

Once again, we end up back at square one, where the best method to identify bumblefoot so that you can act quickly is to simply check your chinchilla’s feet.

This is easiest if you are holding your pet. If you are a newer chinchilla owner and need help with this specific task, you can read my post about how to get your chinchilla to enjoy being held.

This will help you get your chinchilla comfortable with being held early in your relationship, which will ultimately make checking its feet for bumblefoot that much easier.

How To Treat Chinchilla Bumblefoot

For transparency reasons, let’s clear one thing up before diving any deeper.

However, I have owned a chinchilla for several years, have gone through several scares, and have compiled all the information for you in one easy place to read: this website.

Disclaimer out of the way, here’s the deal with treating bumblefoot in your chinchilla.

I strongly recommend talking to a vet who specializes in taking care of exotic pets like chinchillas.

In most circumstances, your vet will likely suggest one of several options to treat bumblefoot for your chinchilla. Sometimes, it may take a combination of treatments to remedy the issue.

Systematic antibiotics, such as Trimetharprim Sulfa, are often a part of the treatment. These specifically help eliminate the infection source.

Additionally, a topical ointment can help get rid of old tissue and promote the growth of new, healthy tissue.

You are also probably going to want to pad your chinchilla’s cage with fleece liners, and potentially even additional towels or padding, to soften all their landings and other movement during the treatment process.

Lastly, your vet will likely recommend that you use liquid bandages to seal off the bottom of the foot and to ensure that no further infection can penetrate the foot and infected area.

What Is Expected Of You

After noticing the bumblefoot, visiting your vet, and returning home, you will likely have some new daily chores in order to provide the best care possible for your chin and to get rid of the bumblefoot once and for all.

First, you will be responsible for ensuring that your chinchilla takes any and all prescribed medications. Second, you will likely need to change your chins bandages a few times a day.

This is especially true in the beginning, in order to keep the infected area clean during the healing process.

When changing bandages, you will also need to apply tropical ointment to ensure your chin stays moisturized and that healthy skin grows back. Otherwise, the dry, crack and infected skin could keep getting worse.

Outside of this, some love, affection, and sympathy for the pain your chinchilla is likely going through can go a long way. 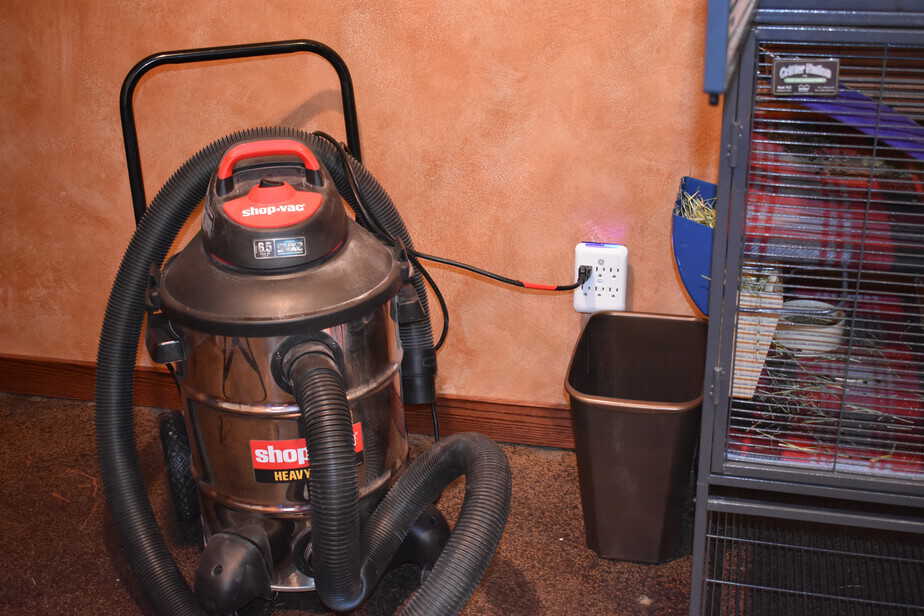 News flash my friends: a chinchilla’s cage needs to be cleaned frequently no matter what.

But with bumblefoot, it’s even more important to keep up with the cage cleanings, to ensure that anything your chinchilla’s foot touches is clean and bacteria-free, to prevent further bacteria from penetrating the wounds.

This means upping your cleaning schedule to a minimum of once per day.

This should include washing the fleece liners or changing bedding, and removing and discarding all debris and chinchilla poop.

Trust me, keeping the cage clean during this time, and in the future, is only going to make your life easier.

As stated previously, why bumblefoot happens to chinchillas among other rodents and species is a bit of a mystery.

But it’s a common consensus that avoiding wire bottom cages is an excellent first step toward preventing it.

It simply means less hard surface inside the cage for your chinchilla to spring on and off.

Remember, chinchillas love to jump and climb and love the vertical space. Obviously, with something like bumblefoot, this can make things worse. That’s why I always recommend fleece liners.

Fleece Liners To The Rescue 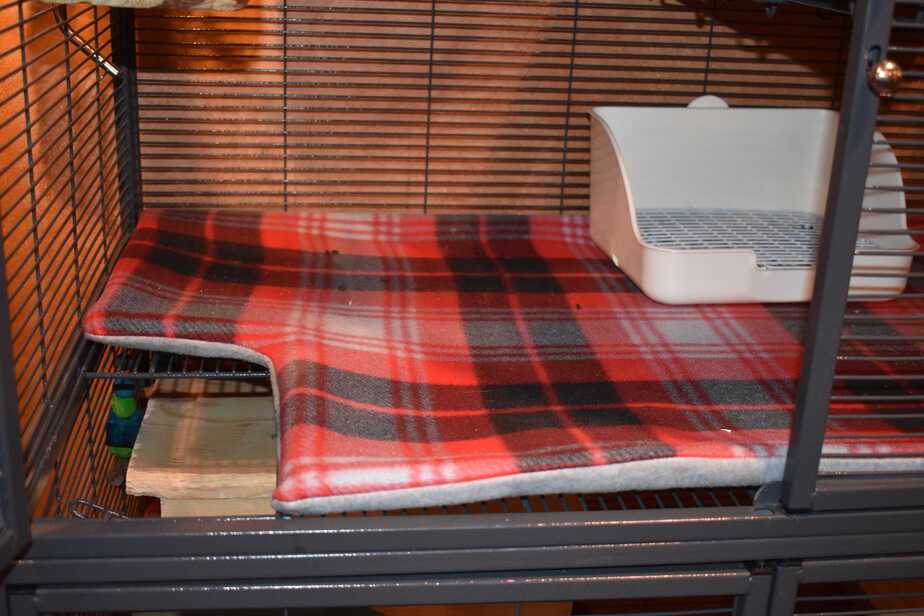 I know we already touched on this previously, but I wanted to mention it one more time, because I find it extremely important.

Many owners see that the fleece liners cost more than traditional bedding and discard the idea immediately.

But they’re actually cheaper. Standard bedding needs to be replaced constantly. Fleece liners last a long time. Over the course of their life, you save a TON of money with fleece liners.

At a minimum, use fleece liners for all your cage trays. But you can even consider placing fleece liners on other objects inside of the cage, such as the wooden ledges, to provide further padding and comfort.

Fleece is safe and easy to clean. And if it can help prevent issues like bumblefoot, pain, and suffering, why wouldn’t you use it, as opposed to a wire bottom cage?

And again, it eliminates the need to ever purchase aspen shavings again in the future. That makes it the much cheaper avenue, too.

Enough with the preaching. It’s ultimately your decision, of course. I just wanted you to know how much better the fleece liners have been for me an my chinchilla.

Clean All Accessories Inside The Cage

You need to ensure that you also wipe down all of these accessories.

The point is to make sure you don’t neglect cleaning everything in the cage, to help cure bumblefoot as quickly as possible.

Chinchilla bumblefoot is something that can absolutely happen to your pet.

But now that you are better prepared for this occurrence, you should now have an idea of what to look for and how to handle it.

Even better, you should also know how to minimize the chances of it ever occurring again in the first place.

While possible and relatively common with some rodents and other small animals, bumblefoot is nothing to fret over too much.

As long as you pay attention to your pet, you should be able to identify this disease early enough to treat it and get your chin back to full health in no time.

I wish you the best of luck with your chinchilla and any illnesses or injuries from which it might currently be suffering.

Share your thoughts, concerns, and stories regarding chinchilla bumblefoot

As always, I encourage you to provide further insight on topics to help benefit all chinchilla owners.

What are your recommendations when it comes to chinchilla bumblefoot?

How did you handle it, and would you do anything differently?

As always, Chili and I appreciate you stopping by and reading. Thanks again and we will see you next time.