You may have heard that owning a chinchilla is expensive.

There’s a reason for that.

But it’s not a good reason. Because it’s not really true. We’ll get into that below.

Chinchillas do cost a bit more than most other rodents. But the difference is minimal.

And the ongoing costs of owning a chinchilla are incredibly low.

The overall cost of a chinchilla might be a bit higher than other rodents, but it is still far lower than most pets.

Keep reading to learn how much a chinchilla costs, how much you can expect to pay for all the necessary equipment, and how much your recurring costs will be.

How Much Does A Chinchilla Cost?

Chinchillas cost $150 to $350, depending on the breed and color. But that’s just for the animal. There are a number of other startup costs associated with adopting a chinchilla, plus some recurring costs as well.

Buying a chinchilla will cost you, with the cage being the largest expense (assuming you get a good one). It’s no different from any other pet. But understanding all the costs involved makes it much easier to plan ahead.

The good news is that chinchillas are not all that expensive to adopt. And the recurring costs are low, too. The most significant expense definitely comes when you initially bring your chinchilla home.

So let’s start with the initial costs, before moving on to the ongoing monthly costs of keeping a chinchilla. But before that, we have a small pricing table that shows you cost estimates for all of the initial and recurring expenses you can expect.

Total Cost Of Owning A Chinchilla

The items in the table above are the things you need to buy for your chinchilla. Of course, you can buy more, but these are the essentials. That said, there are a few you can go without, but we would not recommend that.

There are also some options. For example, you can choose between traditional bedding options like wood shavings, or fleece liners. The fleece costs more upfront, but it is reusable. That means no recurring costs, so you end up saving in the long run.

We’ll talk a bit more about bedding and the other items in the table in the rest of this post.

As you can see, the costs of getting a chinchilla are not all that high. That surprises a lot of people.

Although chinchillas are sold in common pet stores, they are still one of the more exotic rodents. For that reason, many people believe that they are expensive animals.

But nothing could be further from the truth. And I think our table breakdown of the costs of adopting a chinchilla illustrates this. But they do cost more than other rodents, like rabbits, hamsters, or rats.

We won’t go into the reasons why here, but we do have another article that details why chinchillas are more expensive than other rodents. And some more rare types, like the angora chinchilla, cost even more. They can cost up to 5 times as much as a standard chinchilla.

Now, keep in mind that the majority of the cost in the table above is your initial cost when purchasing a chinchilla and the equipment it needs. After this initial blow to the pocketbook, your ongoing cost is going to drop significantly.

All of the big items, like the chinchilla itself, the cage, and the initial accessories like a nest box or even ramps and ledges that are placed inside of the cage are one-time purchases.

Of course, that assumes you buy the proper size cage and don’t try to shave too many dollars off the cost by getting substandard equipment that will have to be replaced a year or two down the road.

To ensure that does not happen, let’s take a look at the main expenses you can expect and clarify exactly what type of cage, etc. you should get.

Cost Of Chinchilla Cages And Bedding 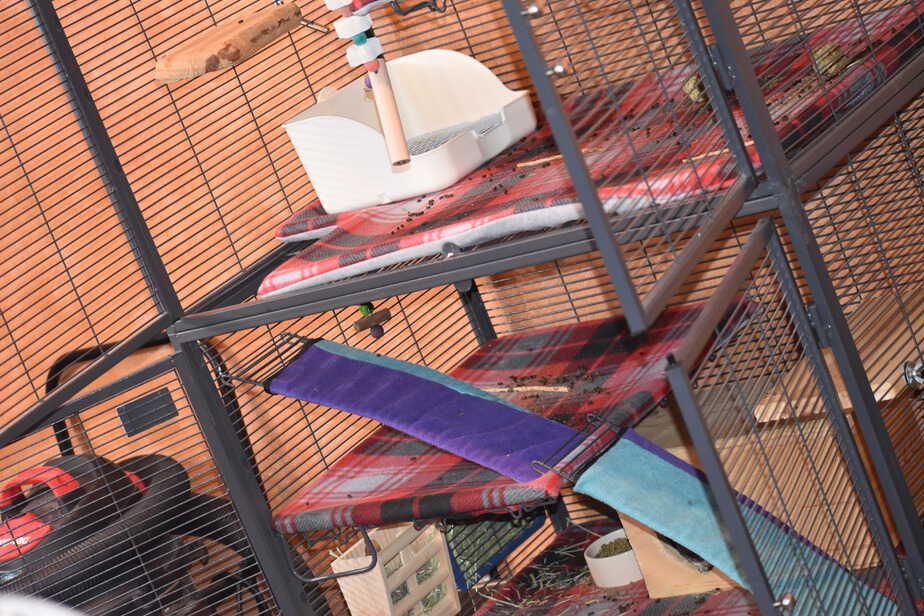 The chinchilla itself and the cage are going to be the two most expensive items you buy, by far. But please don’t buy the cheapest cage you can find.

Chinchillas need plenty of space to thrive and be happy. That means getting a proper sized cage so they can run, jump and climb to their heart’s content.

I use the dual-level Critter Nation 2 cage from Midwest Homes. It is easily the best cage for chinchillas you can get.

It has plenty of space and there are custom fit fleece liners available for it. Those make cleaning much easier and save you money in the long run, since you no longer have to keep buying more wood shavings.

This cage also has easy to order custom fleece liners.

Piggy BedSpreads Fleece Liners for Critter Nation Cage
5.0
$78.95
View on Amazon
We earn a commission if you make a purchase, at no additional cost to you.

These can make your life easy and make it, so you never have to worry about purchasing chinchilla bedding again. A win-win situation if you ask me.

Assuming you purchase this cage, that’s going to add around $250 to your cost to adopt your chinchilla. The fleece liners generally run around $90, while standard bedding is around $15 (but remember, standard bedding will be a recurring cost).

If $250 for a cage is out of your price range, be sure to read my post about the 3 best chinchilla cages to see my recommendations for some cheaper options that will still get the job done.

That post will also detail what makes one cage better than another when it comes to owning a chinchilla. But when it comes down to it, the best cages are not much more expensive than most of the bad ones. Pay a little more now to pay a lot less later. 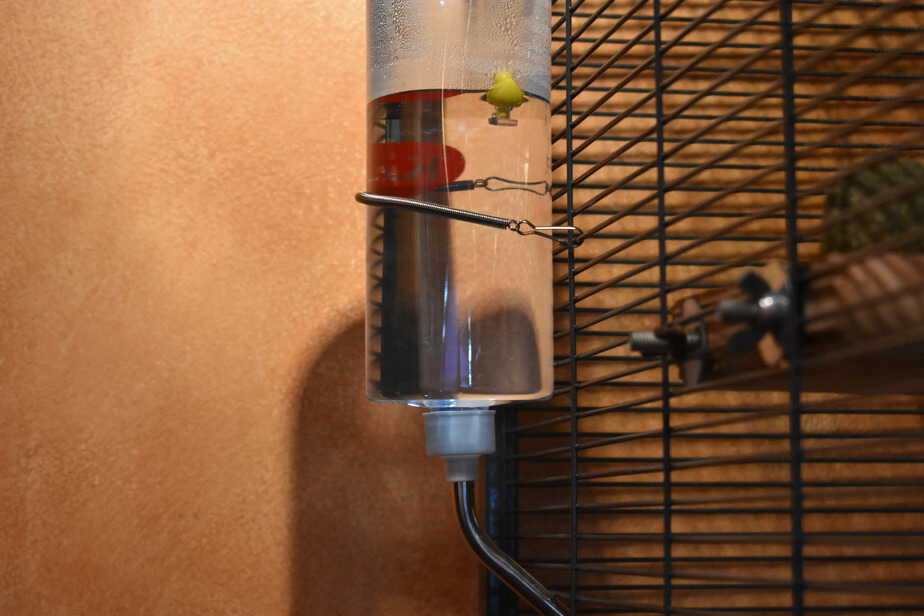 This is another area where you will need to drop a few dollars when you adopt a chinchilla. Chinchillas love to play with certain items and it’s ethical to make sure they have these items.

You can see my post about the best chinchilla toys here. The good news is that these are very cheap, for the most part.

In most circumstances, we are talking about water bottles, hay feeders, hay cubes, wooden chew sticks, a dust bath, ramps and ledges, and maybe some miscellaneous little toys. These get placed inside of the cage to allow your chinchilla to remain active and to file its teeth to ensure optimal dental health.

You won’t spend more than $30 to $40 on these items, if you get them from online marketplaces like Amazon. They usually have everything you will need for your chinchilla, so we usually just recommend purchasing your chinchilla’s favorite items to play with there.

Cost Of Water, Food And Treats

You can’t adopt a chinchilla without purchasing the necessary foods, making sure you have water for your chin, and ordering some treats to offer from time to time.

If you are newer to adopting a chinchilla or still in the phase where you are asking yourself “should I get a chinchilla?”, I’d recommend reading my post about what chinchillas eat to give you a jumpstart.

Trust me, people. It’s all cheap items when it comes to food.

A gallon of water will last you nearly a month and cost $1 (in some locations, tap water is fine), and chinchilla pellets and timothy hay will certainly not break the bank either.

Once you have made all of the initial purchases, the expenses of owning a chinchilla are about as minimal as it gets. But you do want to understand the ongoing monthly costs you should expect. So let’s do that now.

The ongoing costs you will encounter when owning a chinchilla are minimal. And you can reduce them considerably, if you take my advice and purchase fleece liners for your cage.

Ordering the fleece liners will increase you initial costs, but eliminate one of the biggest recurring costs (bedding) going forward. Even better, fleece liners are cleaner, better for your chinchilla’s feet, and look much better inside the cage.

Overall, I currently spend about $15 to $20 per month in ongoing costs to take care of my chinchilla. This includes applewood sticks to chew, miscellaneous chew toys and food when it’s needed.

If you go with traditional bedding instead of fleece, expect an additional $10 to $15 per month for wood shavings. That makes a total of $25 to $35 a month, which is much lower than most pets.

Chinchillas are very easy to pets to own and certainly don’t rank anywhere near the top for most expensive animals. In fact, they rank near the bottom.

This is one of the reasons I’ve written a number of posts comparing chinchilla ownership to owning other popular pets. Here’s an example of this in my post debating if chinchillas are better than rabbits.

Can You Buy A Chinchilla At A Pet Store And Save?

This is a question that comes up frequently when it comes to buying a chinchilla and the price you can expect to pay. That’s because places like PetSmart usually sell their animals for less.

I got my chin from a local breeder, so I actually wasn’t sure about this. But I went ahead and called PetSmart to inquire about this.

So, can you get a chinchilla at PetSmart?

Yes, it turns you can get a chinchilla at PetSmart and many other pet stores. That said, I don’t generally recommend buying a chinchilla from PetSmart or similar pet stores, if you have other options in your area.

This is because their chinchillas have probably not been raised around other chinchillas or humans. It’s likely they will have a more difficult time socializing after adoption.

Chinchillas are friendly and affectionate pets, but it is common for chins purchased from a pet store like PetSmart to have more difficulty adjusting to their new environment.

It’s also possible that you run into other issues such as ringworm or other infections when purchasing a chinchilla from a store like PetSmart.

As far as price, it turns out it’s nearly the same as purchasing a chinchilla from a breeder. When I called to check the price at PetSmart for a chinchilla, they told me they were currently waiting on a new shipment of chinchillas and the price would be $150 each.

You can find them for a similar price at breeders, though I would expect to pay a bit more. Maybe around $200. But there is a good chance you will save more than that in vet visits by buying from a breeder instead of a pet store.

How Much Is A Chinchilla: Final Thoughts

Yes, you certainly have costs involved with adopting a chinchilla, and understanding how much a chinchilla will cost you at the time of adoption and after is important and helps you plan ahead.

At the end of the day, chinchillas are animals that don’t require much except for love, affection, and some time out of their cage.

Besides these items, they need the basics such as food, water, and items to keep their minds stimulated.

Chinchilla’s are certainly not an overly expensive pet to own and I highly recommend adopting one if you are still on the fence.

However, I do always encourage feedback on my post to get all your thoughts on the subject as well.

Chili and I wish you the best of luck with your new chinchillas and hope that if you are on the fence, that you decide to adopt a chinchilla soon!

Do you feel I have left any major cost of this breakdown?

Do you think owning a chinchilla is expensive?

As always, Chili and I appreciate you and will see you next time.