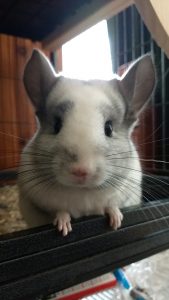 I think those points clearly illustrate that chinchillas are extremely clean animals and require little to no maintenance and not a ton of care to remain clean and odor free.

In fact, unless a chinchilla is sick, you will likely never experience a chinchilla that smells or produces any form of an odor.

I do, however, want to take the time to dive into how clean chinchillas really are. If you are a reader who has 2 minutes to spare and you’re interested as well, I recommend scrolling down and sticking around for a moment.

This should give you a solid foundation and give you the tips needed to maintain your chinchilla’s hygiene.

How Clean Are Chinchillas and What Sets Them Apart?

One of the most significant factors to the equation that goes to show how clean a chinchilla is really coming down to the mere fact that a chinchilla never needs to get wet or have a traditional bath with soap and water like other family pets would require such as a dog.

Chinchillas need nothing more than their self-grooming techniques and a dust bath 2-3 times per week. That’s it. If you don’t believe, be sure to check out my post about why chinchillas bathe in dust that you can see here.

It’s straightforward to care for a chinchilla for this precise reason alone. The beautiful part about chinchilla dust baths is that they also do this on their own. All you need to do is place the dust and dust bath container on the ground for them, and they will roll themselves into a clean and soft fur state.

The next part of understanding how clean a chinchilla is compared to other animals is the mere fact that you aren’t going to be purchasing a special vacuum designed to help dispose of all of the hair and shedding that is taking place like other animals would produce.

I’ve been so impressed by this with my chinchilla that I also had to write a detailed post about chinchilla shedding that you can read by going to this blog post on my site here.

In addition to the light shedding in the post detailed in the link a few sentences back, you also have the fact that chinchillas are very allergy friendly.

Chinchillas aren’t known to activate or bother most individuals’ allergies. In fact, chinchilla owners don’t really experience any allergies from chinchillas unless the dust that your chinchilla rolls around in happens to trigger an allergenic episode.

I also have a post on this site detailing everything you need to know about potential allergy issues with chinchillas that you can see here.

Chinchillas Poop Is Hard and Odorless

Unless you have a chinchilla with a potential health concern, your chinchillas’ poop will always resemble the poop of mice.

Although this is a huge positive about how clean a chinchilla is, it should be noted that chinchillas do poop basically all the time which can be broken down easy to understand in my blog post here.

It illustrates everything you need to know about chinchilla poop in case that’s something you feel like reading at the moment. If not, no hard feelings. I’m not a big fan of animal poop either.

Additionally, be sure to check out this post here. It details if chinchillas can eat certain fruits or not and feeding your chinchilla the wrong fruit could produce loose or soft poop which surely goes against a chinchilla being a clean animal.

Soft chinchilla poop is rare and for the most part, you will never smell nor have any significant complaints about a chinchilla poop. The biggest concern about cleanliness I read in forums refers to how hard it can be to keep chinchilla poop inside of the cage.

Fortunately, I know this is a concern from owning my own chinchilla and have a few tricks you can implement for keeping chinchilla poop inside of the cage that you can check out here.

Fleece Liners for Your Chinchilla Cage Can Save The Day

If you haven’t purchased fleece liners for your chinchilla’s cage trays, now is the time to do so. I personally use fleece liners that are specifically designed for the Critter Nation 2 Dual Level Cage. I absolutely love them and believe they are worth every penny.

I also believe that as of today, the Critter Nation 2 Dual Level Cage is the best cage for a chinchilla you can buy due to size and the fact that fleece liners can be ordered and pre-made to fit for these trays.

If you haven’t purchased a chinchilla cage yet and it’s time to upgrade, be sure to check out the Critter Nation Cage 2 Here. (Link to Amazon).

Additionally, these are the exact Fleece Liners I use for this cage. (This Link Will Take You to Amazon).

If you are on the fence about jumping onboard the fleece liner bandwagon, you can also start by reading my post about how fleece liners are perfectly safe for chinchillas here.

The main idea behind these fleece liners is they have an absorbent pad, they keep your chinchilla cleaner because they don’t have bedding needed in the cage or urine-soaked bedding in the pan trays. Additionally, they are extremely easy to wash in cold water 1-2 times per week.

This makes keeping your chinchilla clean that much easier and I’m a big believer that everyone owning or adopting a chinchilla should go this direction at some point in the near future.

They just make life to easy and keep your chinchilla that much cleaner for you not to consider the small investment.

Keeping Your Chinchilla Cage Clean Is Your Last Concern

The last thing to discuss about how clean your chinchilla will be and how clean chinchillas are in general is the primary cage cleaning routine. It’s extremely easy to do and takes only a few minutes to keep up on it.

I have a post about frequently cleaning your chinchilla cage to make life easier that you can read here.

All that’s needed is a garbage bag, a little vinegar, and a shop vacuum. The post I mentioned previously will break it down step by step for you but to make things simple, you’re basically going to vacuum all debris including the poop, wash the liners and wipe the shelves.

The mere fact that only a few minimal tasks need to be completed to keep your chinchilla at peak and clean hygiene levels are why I can say with confidence that chinchillas are indeed, extremely clean animals. Not much more needs to be said on this topic and I promise that other chinchillas would agree.

You won’t have to smell your chinchilla, they are not going to shed, and they poop the cleanest poop that you can imagine. Outside of washing the fleece liners with a few urine stains on them a few times a week, your work is minimal, and you officially own one of the cleanest pets that are possible to adopt.

Final Word, Chinchillas Are Extremely Clean and Fantastic Pets to Own

So let’s recap for a brief two seconds. Are chinchillas clean? Absolutely. Yes. Chinchillas are very clean and easy to care for and easy to keep clean. I’d argue that my chinchilla is roughly 10-20x easier to keep clean than my own dog that I’ve owned for the past 6 years.

They are very easy going and loving animals that show affection and love toward their owners and families. If you are on the fence about adopting a chinchilla in the near future, I highly recommend it and can nearly guarantee that it won’t’ be a decision that you ever regret.

I’d love your feedback on this topic as well. How clean do you believe chinchillas are? Anything to add to this post for the readers? Be sure to share your stories and drop a comment below. As always, me and “Chili” appreciate you reading and stopping by. See you next time.

My Name is Josh and this is my 1 year old female chinchilla "Chili". We created Planet Chinchilla to share all the stories about owning a chinchilla that you need to know.

Continue Reading
link to Can I Give My Chinchilla A Stuffed Animal?[No, Do This Instead]

In the beginning phases of owning a chinchilla, you are likely curious at what you can give your chinchilla not only to play with but also to sleep with and to provide comfort. Unfortunately,...