Have you heard that chinchillas are messy animals?

There’s a reason some chin owners will tell you this.

But what’s funny is that other chinchilla owners will swear up and down that they’re clean.

In fact, they’ll tell you chinchillas are one of the cleanest animals you can own!

I’m one of those owners, as you may already know if you’ve read other articles on this site.

So what gives? Why the discrepancy?

It all comes down to how you set up your cage and how you deal with three aspects of chinchilla ownership.

Keep reading to learn if chinchillas really are messy, or if they are just getting a bum rap.

Chinchilla can be messy. They poop frequently and the poop can fall out outside of the cage. The same is true for the hay.

But don’t worry. It’s not as bad as it sounds.

The good news is that cleaning the cage regularly dramatically reduces how messy a chinchilla is.

How Messy Are Chinchillas?

Owning a chinchilla is not nearly as difficult as you may think. Overall, chinchillas are clean animals to own and make for fantastic pets.

However, without proper knowledge and with a lack of a routine, you might quickly notice your chinchilla causing a mess.

There are three things that cause the vast majority of the mess that comes with owning a chinchilla. Stay on top of those three things and your chinchilla won’t be messy.

Chinchilla poop is one thing that’s always going to present a challenge. There is nothing you can do about that.

But don’t worry. It’s not that bad.

The issue is that chinchillas poop much more frequently than you might think. But I’ll show you exactly how to deal with it. Here’s what usually happens.

Most owners use a wire bottom chinchilla cage with bedding or aspen shavings beneath the bars. The poop accumulates in the bedding.

This method obviously requires you to change the bedding a lot. That costs money and takes time. Plus it’s messy.

I have a post about how often you need to clean a chinchilla cage here, if you need further information on that topic.

Chinchillas are also known to find clever ways to make the poop fall out of the cage and onto the floor around the cage.

Then they find ways to get poop on various ledges inside of the cage, inside of their nesting box, and even on the top part of their chinchilla hammocks.

It’s just how it goes.

This can be frustrating, to say the least. But, there is a silver lining.

The poop is hard nuggets that do not smell, so it’s about the best-case scenario you can ask for when it comes to poop ending up on your floor.

I also have a post that discussed how to keep chinchilla poop inside the cage that you can see here. That will help quite a bit.

But the best solution I’ve found to deal with the poop issue is to do things completely differently. Instead of a wire-bottom cage with standard bedding, I use fleece liners as my chinchilla bedding. 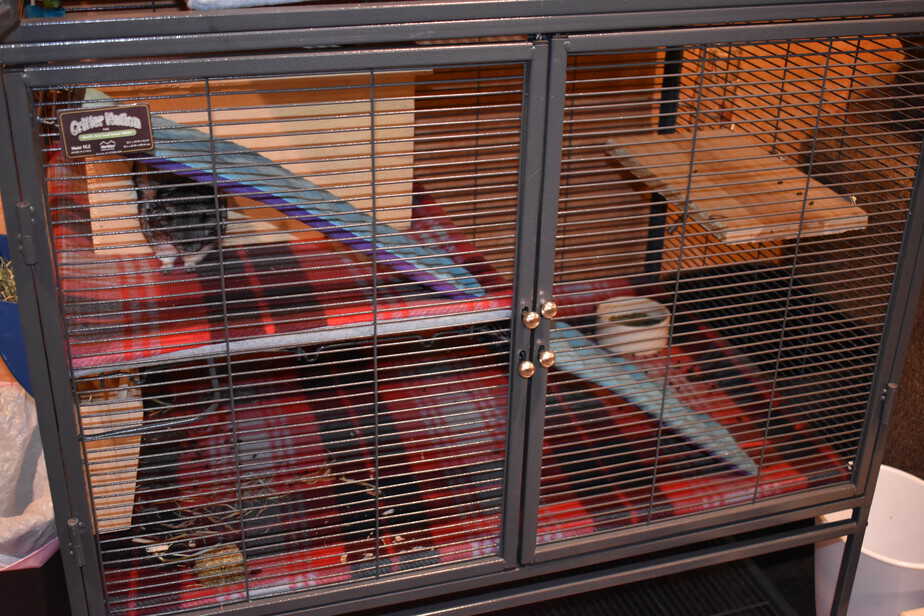 In my post that discusses your best bedding options, I discuss the perks of this in-depth.

To summarize, the poop will stick to the fleece much better, keeping it in the cage.

Not to mention, it’s much easier to simply vacuum the poop off the liners. You can do a quick cleaning every day in a matter of minutes, saving you tons of time.

The only problem you might have if you want to use fleece for your bedding is that they are only available for specific cage models.

If you do not have one of those cages, you’ll have to get some liners custom made, or make them yourself.

I use these specific fleece liners for my cage.

Piggy BedSpreads Fleece Liners for Critter Nation Cage
5.0
$78.95
View on Amazon
We earn a commission if you make a purchase, at no additional cost to you.

They are custom cut to fit right over all the trays inside of the Critter Nation 2 Cage, which is by far my favorite chinchilla cage. That’s why I use it myself.

It’s an awesome two-story cage. It provides plenty of space and allows your chinchilla to jump and climb freely. You can read my post about what I believe to be the top chinchilla cages here.

Getting back on topic, the point I’m trying to make is simple.

With the proper accessories and cage, the mess a chinchilla makes becomes minimal and much easier to deal with.

Okay, enough on poop. Let’s move on to the next big cause of messiness.

#2: Chinchilla Hay And Other Food Debris 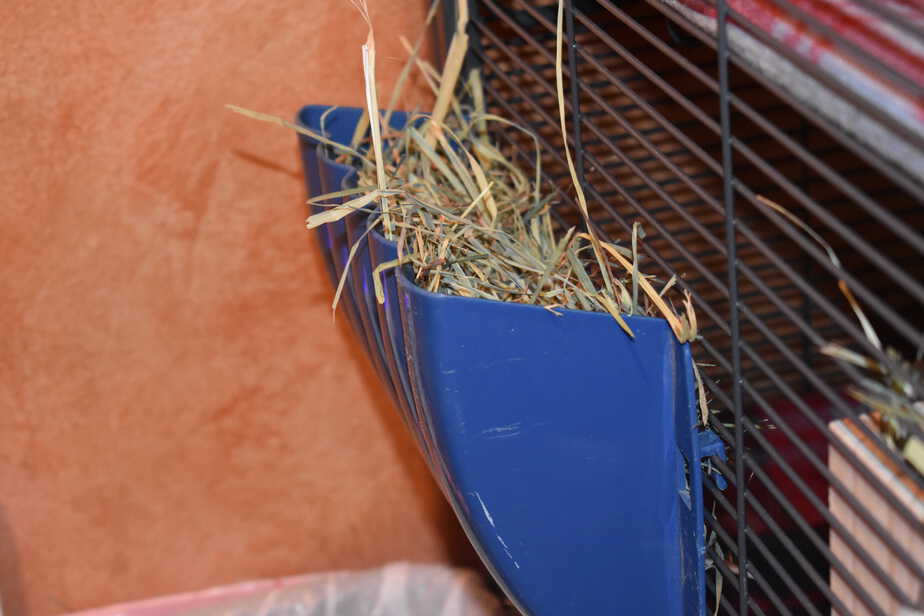 Chinchilla hay and pellets are guaranteed the second most frequent mess you will run into owning a chinchilla.

It’s not that they are purposely making a mess. The hay just happens to fall out of the hay feeders and into the cage or onto your floor.

They tend to pick and choose which pieces of timothy hay they prefer the most and leave the rest sitting around the cage.

Again, if you take my advice and use an affordable and reliable shop vacuum, it cleans these types of messes up in about 45 seconds.

Especially if you are using the fleece liners discussed previously.

But even if you don’t currently use fleece liners, hay and food pellets are not reasons to change the bedding in the cage. You only need to change it when it is soiled with poop and urine. Unfortunately, that is virtually all the time.

But I do use the fleece liners and I even go so far as to keep a shop vacuum that I bought explicitly for cleaning my chinchilla’s cage plugged in and right next to the cage.

I use this shop vacuum here:

Shop-Vac 5-Gallon 4.5 Peak HP Stainless Steel Wet Dry Vacuum
$107.95
View on Amazon
We earn a commission if you make a purchase, at no additional cost to you.

It’s a steal for the price and gets the job done quickly. It removes all the hay and poop, and keeps my chinchilla cage clean.

It also ensures that I don’t have to use the same vacuum that I use around the rest of my house.

Don’t get me wrong, though. If it’s not in the budget to have a separate vacuum for the cage, then don’t worry about it.

But if you do have the few dollars to spend, it will seriously make your life a lot easier.

Outside of the recommendation I just listed out, you don’t have much to do or much to worry about.

It’s not a huge deal and in all honesty, doesn’t make a huge mess. Just stay diligent with the cleanings, and you will be fine.

Now let’s move onto the last item that can cause a mess with chinchillas. 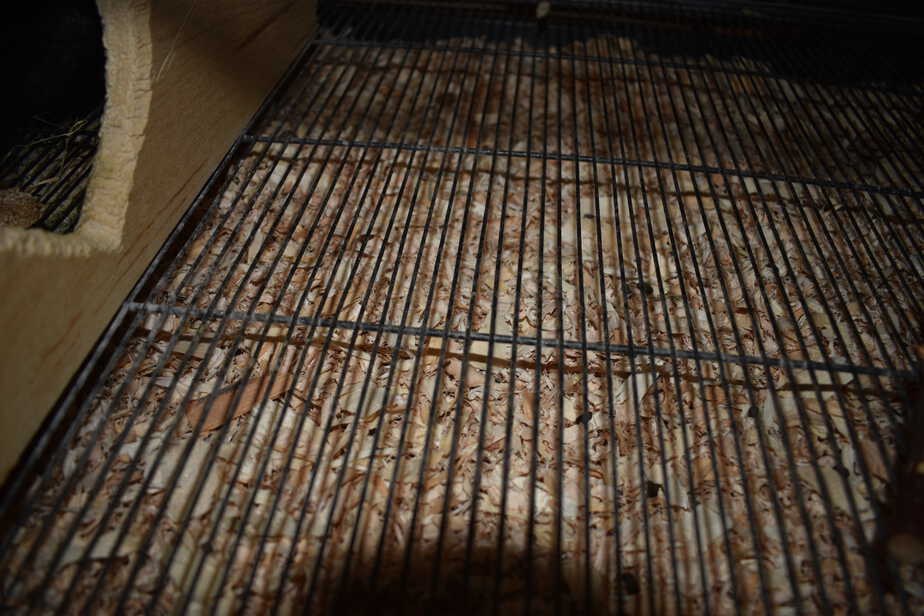 Alright. The last item I want to discuss in this post.

It happens. It’s not avoidable. Not in the beginning, at least.

The best thing you can do to avoid this altogether is to begin potty training your chinchilla to urinate in a litter pan at a young age .

If you start young, it’s entirely possible to accomplish this. I know this specifically because I’ve done it.

It did take time, however.

You can read my post about how-to potty train a chinchilla.

You can also check out my post about the best chinchilla litter here.

Now, if you don’t want to take this path, you will have to deal with the mess. This is actually more common among chin owners than taking the potty-training route.

As your chinchillas pees inside of the cage, it will soak the shavings (if that’s what you use). You will need to discard and replace them a minimum of once per week, but I recommend twice per week.

Or, you can take my advice from earlier and use the fleece liners. This is much easier.

You simply allow your chinchilla out for playtime, and when it is out, throw the fleece liners in the washer with cold water and let it run on a quick cycle.

After air-drying for a bit, you’re done. The mess has been removed. You can even use two sets of liners to avoid having to keep your chin out of the cage while you wash them.

I’m telling you, chinchillas are shockingly clean animals. They are also shockingly odor-free.

Using this advice in this post is going to make your life very easy, owning a new chinchilla.

After reading this, I don’t want any of you to get the wrong idea.

Chinchillas are low maintenance. They do not require much supervision and are clean animals.

Outside of general survival and dietary needs, they just need social interaction. They are one of the lowest maintenance pets you can own.

Other Recommendations To Reduce The Mess A Chinchilla Creates

Outside of what we have already discussed, the most important advice I can give you is to remain diligent and regular with your cleanings.

Ensure you are doing them on the same day each week. While the same day isn’t necessarily imperative, it certainly helps form the habit and routine.

If you keep this schedule, I can 100% guarantee that you won’t be one of those chinchilla owners complaining of a messy chinchilla or having issues with keeping your chinchilla or the cage clean.

At the end of the day, you need to remember one thing: the chinchilla is still an animal. A rodent to be more specific.

No, not compared to other animals, but chinchillas do have some general needs that you could view as a mess.

Stay diligent and clean the cage regularly, and you won’t have anything to worry about.

I wish you luck with your new chinchilla if you are intent on adopting one soon!

Now it’s your turn to pitch in!

As always, I encourage you to chime in and share thoughts, stories, and concerns on the topic being discussed.

Do you believe chinchillas are messy?

How messy is your chinchilla?

Do you have any other issues with your chinchilla being messy that we haven’t talked about in this post?

As always, Chili and I appreciate you stopping by and reading. We will catch you next time.